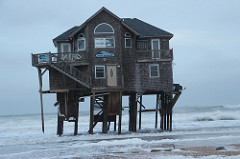 After a shower I fill the tub with water, stick fresh candles into candlesticks and brace each heavy planter in the yard. From the rain guard gutter I rake leaves. Watching the sun press through shuttling clouds, I see there’s no such thing as reprieve without broad damage. Electricity comes and goes, yellow leaves circulate in clusters, treetops contort. The dissonance is too like the news, external hysteria masking an inward calm that moves it, a wave of pictures uploaded to iPhones, the opposite of poetry, which prepares the long confusion for its shape.

“Prepare” my mantra, I stack a pyramid of dry goods in a dry place. It sits on a green tarp, like a lifeguard chair engulfed by sea foam. I tell myself that to see things running downhill is to see them from inside a box—sheltered from rain, retained from winds. Afterward I drive east to the beach for one last look at the jetty being mopped by the waves but resisting, like thick alkaline paper. Cheap plywood covers the windows. Its pulpy surface reminds me of an action painting bearing a place name, an abstract pattern streaked with hackles of loose dirt.

This beach is a poor home for plovers foraging for brine flies in sand flats that camouflage their coats. Pink stakes mark their nesting grounds.  Up dune, down dune, I stab my toes in the sand, pretending my life’s like theirs: threaded with risk and contingence, set to a unifying music. Sometimes I think my preparation has served no purpose. Desk-ridden. Dissecting old maps. Constricted by an invisible tourniquet. I want to wave my arms hysterically and send birds flying forward over the water. But I have limits.

Geese over the water, the apogee of restraint. In their obstinate rigor they never plunge. People say they have their way with the wind, but I disagree. They remind me of withholdings, an impulse checked. Once, my mother cut off half her finger in a Cuisinart. The blade severed her distal phalanx clean. “Does it hurt?” I asked with my expectant eyes. My mother examined the blood, running, as usual, thicker than one anticipates, and the shy nub of her middle bone peeked out at the world. Without screaming, she turned to me, a skittish kid strapped into his booster chair, and smiled.

In the end, all straps begin to itch. Every buckle, once buckled, makes a red mark on the skin. Children’s colors jag pell-mell across the picture, like a seismograph, or strips of algae covering the inlet’s surface. Life choked with too much life. Being young I’m in a hurry to confide my story, but harbors darken, friends drag you off to banquets and the concussion of “Moonlight Sonata” on repeat all night. Despite myself I desire no hearing. In the end,  all talk turns rhetorical. Going away, I feel like turning back.

I feel like turning off the road, though there is quiet in the car, a sense of being leeward, far from the irregular lineup at the pump or the jaws of a dog that erupt at nothing. In his diary, mourning for his mother, Roland Barthes writes: “Is not indifference (to oneself) the condition of kindness?” His notes skate across the even square of a quartered page. Fueled by self-love, the I is at its most garrulous inside its lonely garage. Each of us goes home carrying a generator in his arms.

Carrying a generator in my arms, I note a band of light buttressing the clouds a little. What’s worse, it asks, briefness or infinity? The house looks shirred, as if you were seeing it from behind a dirty windshield, as if there were more to it than a group of shingles glazed with moss and a gutter going round it, like Chutes and Ladders. Since when did you gather your life under a single roof? It’s a tic, trying to control it.

Cut-off, womby, our old house once stood at a remove above the dunes.  All day we dreamt we were going somewhere. The woman, our mother, would call us in from the ocean where we had been rising and falling all day with the waves, sunbaked on neon boards, and the woman, our mother, darkened beneath her beach umbrella, would call us in from the ocean with her arms. “Lambs!” she called us. “Lambs!” And we had been waiting for her. We had gone out only to hear her call.

Will Schutt is the author of Westerly, winner of the 2012 Yale Series of Younger Poets Prize. He is the recipient of fellowships from the James Merrill House, the Stadler Center for Poetry and the Gilman School in Baltimore, and was recently awarded the Jeannette Haien Ballard Writer’s Prize. His poems and translations have appeared in Agni, FIELD, The New Republic, and elsewhere.