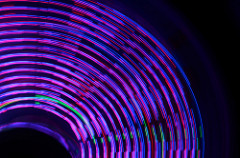 So we’re monads after all,  that’s a relief, complete and separate
and also connected to every other agglomeration of fundamental particles
(aka pine cone, parking meter, vodka orange)
we’ve ever touched however tangentially,
boson from a breath of Plato’s used air
gone two millennia later into the feather of a chicken in Mumbai,
air I exhale full of fermions from the fourth king of Axum’s coronation dinner,
so that if you read any electron’s palm now you can tell
what it will be feeling in 4005.

All this proven by science.

I love science, it radiates more imagination and longing
than all the love poems ever published
and it makes me understand why I’d rather be alone
recollecting the touch of a dog’s paws on my shoulders
(his paws and my shoulders changed forever)
than listening to ten of my fellow citizens
talking about what’s wrong with the state of the roads
in a country with no work ethic
and not enough ubuntu—

these roads peopled with whispers of Einstein’s pipe smoke,
each gently describing everything else
without making a fuss about it,
and with no illusion that the world revolves
around what it has to say,

even though it does,
as science is increasingly showing us to be true.

Karen Press most recent collection of poetry, Slowly, As If, was published in 2012.