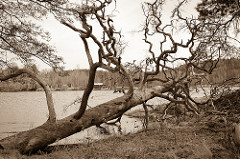 in a roll of fencing wire in the red shed: not dead

the bearer of dead skin, expanded even. Not quite

an elegy of living into habitat reduction. What kind

of contradictory or ecstatic or emphatic elegy

is this? At this precise point, Tracy said a car

from the loop racing the clock would crash

and it did. Through a fence into someone’s living.

Perhaps they were okay with risk, celebrating

tension in a portaloo strategically located,

the logos and slogans of the only ones who’d

in the documentary eclipse of the organic.

The hope repetition will make tradition.

Force-fed, battered people who get a taste

for the formula and endless distension

of their orifices: stimulation must be half-

or surveillance cameras. A snapping

telephone. Bite! Bite! When the drought

sweeps back in and the dunnart hangs in

there on surfeit insects unbalanced,

drinking their blood. I will keep

the mental map of where I’ve seen them

to myself. Selfishness? Stepping cautiously.

I won’t call them “Gilbert’s dunnarts,”

as they’re not and never were, though

he plundered (“collected”) them for John

Gould, in whose name I belonged

to the naturalists’ club at primary school,

and raised four hundred dollars to save

Young men buy up properties from their one-month

on, one-month off fly-in fly-out gigs on the mines.

They bring greed with them and turn ground inside out,

sucking what they can out of their month’s leisure.

part of and embrace so compassion is latitude

Like blank cigarette packets the brand inside still kills.

Sociologists can ride pillion to all of this but we

have to live within the fallout. Pietry (pious poetry)

is funded by ALCOA and BHP. Or the virus

that’s got inside, shuffling, switching and rearranging

de-speciesisation and re-alignment, the “best of”

remade in the ultimate hack, all guidebooks

energy for its affirmation; or sidling furtive

as its calculated smile to take the prize

that we might not even recognise as having worth

but will eventually, when it shines loud

from Louche’s snappy pocket. To frolic

in heritage waste, supplant and replant

with nano-blasts of infiltration: their freedom,

their freedom, their choices imposed: ruminate

on that! And if you’re following the intertextual

gesture. There is none. The regaining won’t happen

by our hands. Not even fingerprints remain.

The half-fallen tree I am preparing to cut up,

saw into parts that will mewl in the firebox,

might be called a “limb” of the greater tree:

a horizontal rather than vertical take

on growth; I insist we discuss this

and vice versa; I insist the immolation

of parts is called “incineration”

rather than warmth, mere warmth.