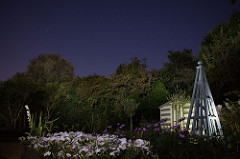 Morning air pumped off, cannabis-induced despondency
Replaced him and her. Far away, his ball-playing days,
His cap floating on the river, his soft tissues
Like severed seaweeds. This happened in 1976.
I was living alone in the garden, barely ten, frightened
At night, trembling. Have you ever heard a flower
Bloom? I saw
A fish shuttling in formaldehyde.
Then I had the inkling of being bottled: He and she,
Eyes and bodies, gadgets of two blind beings,
Torn to nothing. The sorrow of flora:
They understand, they can’t speak—
A blossom emerges, a woman living by selling her blood
Hidden in blood, cowering, never seen again,
Just what I did these years later, uttered in rain
The November of that year, those well-tuned colors,
Shadows that shrink and expand. Under a stunned moon,
He stands, these decades later, the dust she breathed
Cornering him still, her face
Locked, not a single picture left.
Ever since then, I’ve trusted my senses only,
Her corpse deserted by birds, the flesh of all reason
Swinging on a sheet of paper,
That fiction surviving in the wind. Now I’m back
In that absent adolescence. No bones of his
Found in the garden. Two people
Buried speechless in one body.
Therefore I’m sure
I’m the scoundrel moon, seeing everything
In the grass, these many years, old tires in the path.

Yu Nu was born in Anhui Province in 1966. He is the soul of the “Inexplicability School” of poetry. His work is characterized by minimalist, absurdist, and surrealist short poems. He is the author of The Watchman and one other collection of poems.

Stephen Haven is the author of The Last Sacred Place in North America (2012, winner of the New American Press Poetry Prize). He has published two previous collections of poetry, Dust and Bread (2008, for which he was named Ohio Poet of the Year), and The Long Silence of the Mohawk Carpet Smokestack (2004). He directs the MFA Program in Creative Writing at Ashland University, in Ohio. He was twice a Fulbright Professor of American literature at universities in Beijing.Li Yongyi is Professor of English at Chongqing University, in Chongqing, China. He was a 2012–2013 Fulbright Scholar in Residence at the University of Washington. His major fields of scholarship include Anglo-American modern poetry, classical Roman poetry, and classical Chinese poetry. He has translated fourteen books into Chinese from English, French and Latin. His translation of Carmina was the first Chinese translation of the entire body of Catullus’s poetry. He is the author on one collection of his own poems, Swordsman Poet Phantom.