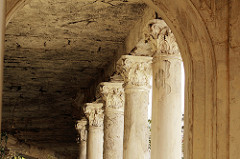 She insisted that a gazebo, grotto, and gate be added
to the Estate. Two obelisks were next. And soon, a sham
castle was built on adjoining land. Then she planned
a Greek temple for a statuesque Aphrodite and six
water-spouting nymphs. Plus, a pagoda! Her follies
were, as Lord Clark said, monuments to mood. But
she had so many! Her fortune fed her fantasies until
one stormy day, she was caught in a downpour. Under
the rubble-stone roof of her hidden hermitage for hours,
she waited, her peasant costume sopping, her doeskin
slippers soaked. The cracking sound was not thunder.
Mossy timbers crashed on her kerchiefed head. Found
dead, she was soon entombed in a mausoleum. In time,
vandals destroyed the weeping angels, Corinthian capitals,
and garlanded urns. Her resting place was a ruin, a final folly.