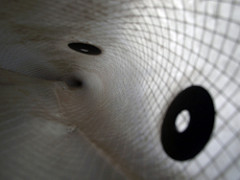 By SUSAN KINSOLVING
Motto: We Provide Warrior Care
The war was over. The only thing to kill was time.
And memory. Looking in a mirror, a G.I. wondered
why. Whether to laugh or cry, he had to face his
future with a new face, one that would be recomposed
with an acrylic eye, a rubber ear, a grafted nostril,
or a plastic nose. Pretend it’s camouflage, the surgeon
said. And thank the Lieutenant Colonel you’re not dead.

The Army took pride in its reconstructive surgery
and prosthetic ophthalmology. Still, the wounded
had to wait through weeks of boredom and healing,
though nothing dulled what they were feeling. Best
to keep the bandages and badinage going, dark
humor was vital to prevent grief from showing:
shouts of Hey, Buddy, I hear you’re here for an ear!

And Watch out, One-Eye’s gonna cry! They yucked it
up because deep down, they knew they were forever
fucked up. As if their faces weren’t freakish enough,
all prostheses were also on display. Case after case,
day after day, the G.I.s could see their bits of misery,
exhibited under glass, and labeled: Ears come in six
skin tones. And there were piles of soft plastic ears
in white, tan, brown, black, yellow, and a sickly grey.
Creepier than taxidermy, one man said, eyeing the eyes,
a huge glassy array of colorful striations, like marbles
left from a huge schoolyard shoot. Hundreds of them,
precious juvenile loot, suggested games and mischief,
ways of ending monotony, a bit of fun for an amputee.
(Boys will be boys, even when they’re maimed men.)

First, they crooned to the female nurses during rounds:
Lucky, lucky, you! You’ve got two!
Two eyes and two breasts! Fair and square:
One’s for the Army; you keep the spare!
Then a nurse would find a rubber nose floating
in a bedpan. Or prosthetic ears fitted over toes. Or
covering a Private’s nose. A glass eye in a navel

was a shock. (Keeping an eye on the Navy!) A male nurse
glimpsed one in a buttock. The eye peeked out between two
hairy cheeks. Surprise! I’m watching you! I’m the asshole
with a view! The nurses knew the men were bored and
felt like freaks, confronting mirrors when they did,
facing an aberration who was once a baby, a kid, a lover,
someone’s son. So the prosthetic jokes were just therapy
and good fun; while piece by piece, the display cases
were undone. For poker, the guys needed chips so they
took a pile of plastic eyes, which made the game come
alive. Raise you five. Then on the table rolled five
blue eyes, with a face-value of a buck. Cards continued,
but with luck, another game was played in the showers.
The ante was upped when an acrylic eye fell on the floor.

In the suds, find the eye! …And while you’re down there,
give it try. How ‘bout opening my other eye! And so they
bonded, fought time, and survived, trying not to feel
too queer about missing half a nose, an eye, or an ear.
The toys with which they played were all grotesque,
but isn’t war, when at its best? Like trading tin soldiers
for body parts? Or eyes for medals, those purple hearts?