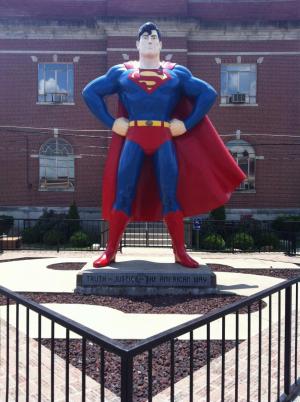 We decided to go to Metropolis because we heard there was a giant Superman statue in the middle of town and even though it would be a long, hot drive, it felt like something kitschy and summery to do with the great swaths of time afforded by summer break. That none of us had a particular affinity for Superman made the folly of the trip even more amusing.

Metropolis, Illinois is the only city in the United States with that name. The young woman who worked at the Superman Museum gift shop informed us of this in a bored but friendly voice when we asked. It was clear she had delivered her speech about Metropolis more times than a person should ever say one thing.

There is not much to Metropolis. As the mythical home of Superman, the town is underwhelming and only has one claim to fame—a Harrah’s casino. The downtown strip is largely abandoned, clean and quiet. In the center of town stands the Superman statue, taller than you can imagine, all blue and red and thick thighs and strong jaw. His chest is chiseled, his expression impassive or stoic. His dark hair curls over his forehead. He stands with his hands on his hips, his cape stiffly flowing behind him. Beneath his feet is a block of concrete engraved with the words, “Truth—Justice—The American Way.” The block of concrete sits in the middle of a concrete and rock garden in the shape of the Superman emblem. And that’s it—a statue in the middle of a small, rural town. 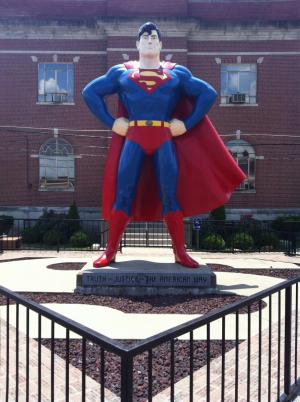 After we took a great many pictures, and had our laughs, I am pretty sure we were all thinking, “We drove 200 miles for this?”

Fortunately, right across the street from the statue, there’s also a museum, the Super Museum—the largest collection of Superman-related memorabilia in the United States. On one side of the building are cutouts you can stick your head in to have your picture taken, just like at the beach. Above the museum entrance is a smaller statue of Superman, his arm outstretched, cape flowing—Superman about to take flight. Also, a sign reading, “Supernirs: The largest selection of currently licensed Superman gift items and souvenirs on this planet.” And, of course, there is a phone booth. Superman is nothing without his means of transformation.

The Super Museum has seen better days. The floor at the entrance is rotting, best to mind the gap. Before you enter the museum you must pass through the gift shop. Nearly everything seems worn, faded. Some surfaces are covered with a patina of dust.

Merchandise is displayed in every available space—stickers, toys, books, comics, backpacks, playing cards, key chains and pretty much anything you can imagine emblazoned with the likeness of Superman. Everything seems a little more expensive than it should be. Some of the offerings are just delightfully strange, like the enormous bags from last year’s Comic Con in San Diego. I bought one because the woman working behind the counter cheerfully told me the bags were extremely rare and she seemed so genuine in this lie I wanted to thank her in some small way for her salesmanship and dedication.

Admission to the museum is $5.00 and worth every penny. After you pass through a taped-up metal gate, you’re in the museum itself, a cavernous room with three aisles of exhibits. We were the only visitors on a terribly hot day and the single air-conditioning unit and lazily twirling ceiling fans did nothing to move air through the hot, dusty, crammed space. I kept thinking, “This is the Superman sauna.”

There is no logic to the exhibits in the Super Museum. But what it lacks in organization, it makes up for in volume. Every available space is filled with Superman memorabilia and collectibles—action figures and figurines, nesting dolls, mugs, plastic tumblers, plates, posters, toys, thermoses, jewelry, portrait and candid photography, a pogo stick. There’s no doubting that the museum is owned by a man, Jim Hambrick, who truly adores Superman. Sometimes, love really is enough.

The museum also contains the detritus of generations of Superman from the Christopher Reeve movies, comics, and television show. There is Lex Luthor’s computer. There are wigs worn by various actors playing Superman and a Superman gravestone. Idly hanging from a pole, the flying harness an actor wore playing Superman. The crystal shards from Krypton featured in one of the Superman movies are tucked into a corner—a white, plastic, cylinder stand holding plastic shards meant to be crystals. There’s a cover of People featuring Christopher Reeve encased in a cheap wooden frame. Reeve is devastatingly handsome, his hair feathered, his shirt open three buttons down revealing his shiny, smooth chest, may he rest in peace.

One room is dedicated to Supergirl. Helen Slater’s costume from the disastrous Supergirl movie is hanging on a mannequin next to her flying harness. There are cases with various Supergirl memorabilia—figurines, playing cards, pictures and artistic renderings of Supergirl’s very muscular thighs, a Barbie doll.

Across from Supergirl is a room dedicated to the television show Lois & Clark. Inexplicably, a mannequin stands in Lois’s lingerie. There are props and costumes from the show and everything is vaguely familiar but not quite what you’re expecting to see, including the placard from the show that normally appeared in the credits.

On and on the exhibits go. None of it is well preserved. Costumes are rotting. Paper is yellowing. Glass cases bear wrinkled signs, some written in pen and marked with the smudges of fingerprints. There are several signs warning patrons not to lean against display cases because they simply aren’t sturdy. None of it matters, though. The Super Museum is one of those increasingly rare places you can only find in rural towns—overlooked and rather strange but eminently memorable.

Roxane Gay lives and writes in the Midwest.