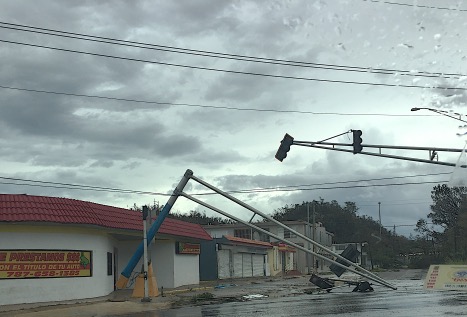 The first empty ring echoed all over the room. Since we had left the island, the phone-bridge had been an effective method to recover some of the sounds that, in their absence, made our exiled evenings emptier. But when they failed to answer, uncertainty and impotence took control. It was still early there. Only the low-pitch whistle of the still-weak wind caressing the tops of the palm trees, that ambiguous premonition that could sway either way. This time it would be real. But not yet.

It had rained before, we said. We had been spoiled. Nothing strong since ’99. Beer and water, maybe some canned food and storm shutters, but mostly laughs. Kids roaming the sun-drenched streets on a storm day. The sounds of nails penetrating wood and drywall. News anchors drowned by the echoes of distant songs and the normal wail of traffic, even if the birds were gone. How many times was the wind supposed to arrive but was gone before daybreak? Too many.

But it was worse this time. We were not there. In ’99 we were there. We struggled together, everyone tightly close to each other, hiding in the bathroom, windows barely covered with mattresses due to bad planning and worse budgets. This time, it was almost the same but we lived far away, in a passive-aggressive landlocked territory occasionally visited by limp tornadoes. And all we could do was wait.

We could imagine how it was; we had lived it before, except it was not like this before. Back then we were better, we were stronger, we were in a different age. Now we were consumed by the Junta’s long-lasting dinner party, one which we, the colonized, were forbidden to attend, even if it was our dining room. As usual the little islands went down first. We lost track of them, and while we feared for them, my family was on the other side of the main island. They were almost twenty years older than the last time a real hurricane visited us.

Our last conversation was the night before the beast touched the main island. Our talk was hollow. There were traces of hope, that vague wish that it would be like always, although we all knew it would not. The words were as light as the solid structures that would be ransacked in the morning by the gusting winds. But that was still in the future. At this moment it was still early on the night before, and yet a few hours afterward the power would go out, when the winds were barely reaching the shore. It was a tradition. Some said that the government shut down the power to avoid a power outage, because that was the way the island worked: in oxymora and paradoxes.

Then there was silence. The last successful phone call went through at 8:00 p.m. We tried once more at 10:00 and got nothing. We depended on internet whispers. Lots of sites were full of similarly worried crowds; none provided new information, only requests. This would be the status for days to come.

And then she landed.

She rocked the shore with her savage breath, and the waters were not any kinder. It was a brutal noise, the bastard child of a jet engine and a rock concert without any trace of surrealism’s grace. The zinc roofs were the first to go, but even the sturdier buildings were unceremoniously stripped by the raging wind. The sand disappeared under the restless sea, in some cases permanently. By-the-shore establishments, which profited off the sea, were now swallowed by it. Of course there were a bunch of humans prancing outside, some in disbelief, others in open defiance: the occasional drunk and the typical surfers, the usual crew. But at some point, everyone disappeared indoors, because the storm was different: stronger, and merciless. She slowly dragged her rage towards the west, heading home. The eye reached way past midnight, but the calm never did.

In the meantime, all of us in the dreaded elsewhere waited, scavenged for news. It took hours for videos to start appearing. Determining their location was a problem; videos disseminated quickly, and there were lots of errors identifying their precise origin. We, the pessimists, transformed the disaster landscapes into our beloved towns, assuming traces of recognition during the absence of real contact.

One of the heroines was a meteorologist living in the Midwest who used some of the resources of her job to keep track of the weather and established a network of communication where anyone could post questions or information about the conditions on the island. She kept an almost constant online presence for days since the storm landed. We refreshed her page constantly while our anxiety levels went through the roof but we were nevertheless glad of her efforts.

We tried to work, and we did (kind of), but we were always looking at the phone, waiting for any news, biting our fingernails to the quick, trying to appear calm, and constantly fielding questions from those few who knew where we came from. Hard to answer. Hard to think. When the bulk of the people you call family are stranded and all you can do is imagine the last time you went through something similar (we did not know how wrong we were at the time), there’s a lot of room for overthinking and worst-case scenarios. Also, it was the worst.

Five days after the eye crossed the island, someone somewhere got lucky and their cell phone came alive, triggering the usual network of neighbors, relatives, and friends. We managed to have a short conversation. Everyone in the family was OK, but “OK” was a hard-to-define concept. Physically they were fine—or, better said, their physical health remained as usual. But there was something different in their voices. After a week of rain, their hope had dried. Their voices were drained of emotion: flat, dronelike, words drooled from their half-open mouths. They had spent terrible hours hiding from the wind and the sea and the rain, but even more so coming out of hiding. As if war had rained overnight.

The green was gone from the landscape, and now a frail gray dominated, eclipsing the frontier between earth and sky. The sea was brown, full of the rivers’ burnt umber tears. Signposts, windows, roofs were scattered on the ground. The river moved to their front door. They saw the elderly being lifted by soldiers into their trucks and taken to secure locations while they steadfastly held their dogs. People walked slowly among the ruins as if covered by a thick invisible mist, shouldering the weight of an overcast sky that kept promising more rain. Everything was covered by water, and yet there was not a drop to drink.

In the following weeks we tried to send items to them, but to no avail. Our town’s main post office was flooded. The roads were blocked, the power gone, and only sporadic bursts of communication from impromptu cell phone signals allowed the stampede of calls to rush in briefly, only to quickly die out in an ocean of uncertainty.

Tonight, all of this was still to come. Our soil was dry, our windows solid, our power steady, and the soft September breeze was making its rounds. But while our bodies were safe, our minds were there, getting ready for the worst night of our lives. And even that would be nothing compared to the long months ahead.

Hugo Ríos Cordero was born on the West Side of Puerto Rico in 1972. He has published three books: two collections of short stories and one of poetry. He is currently working on a novel called Paper Dragons. He teaches cinema studies at Miami University in Oxford, Ohio. 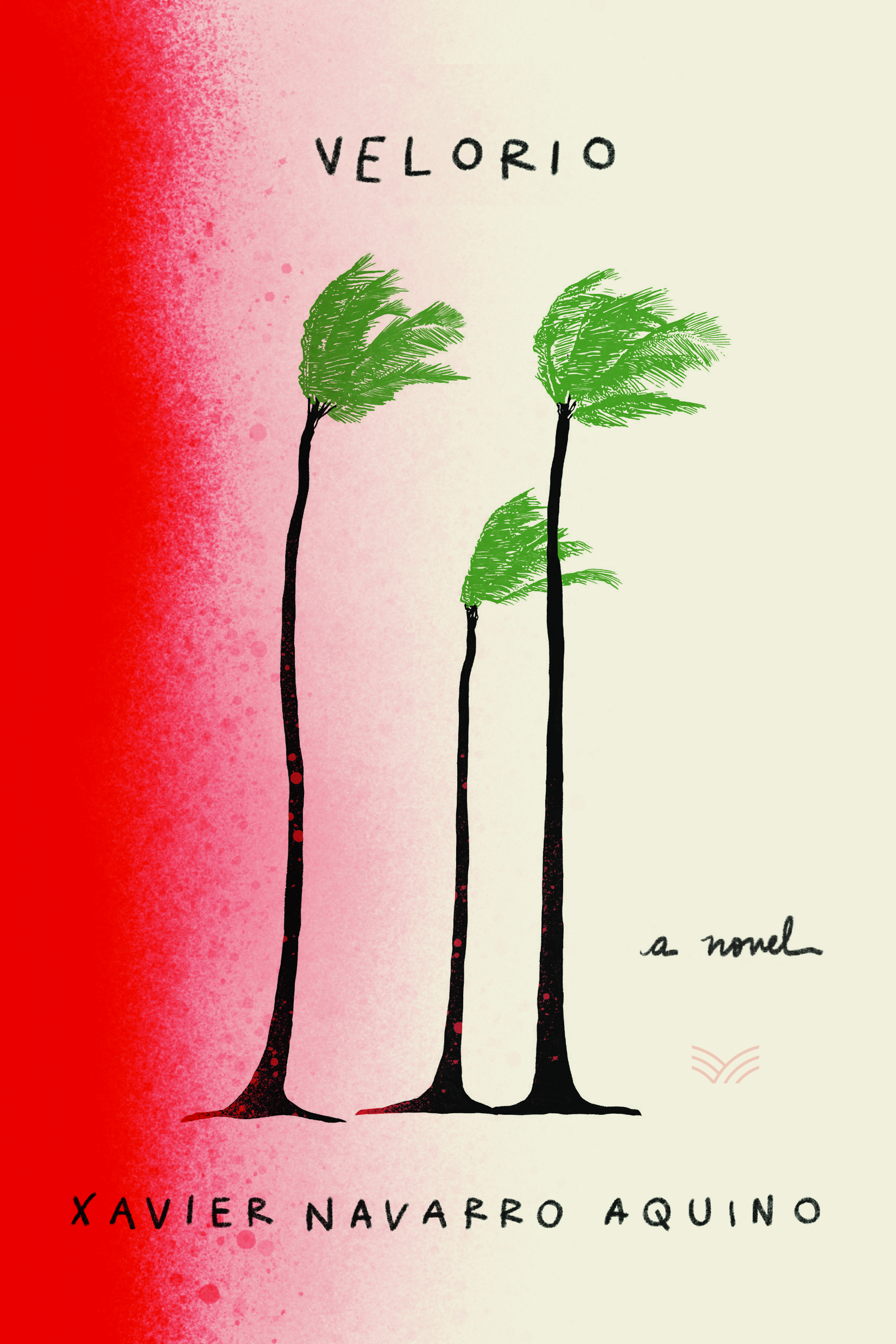 XAVIER NAVARRO AQUINO
We stayed there talking about her history, about her deceased husband, and I could tell she found happiness in recollection. We talked until she started fidgeting as if forgetting where she was in time.