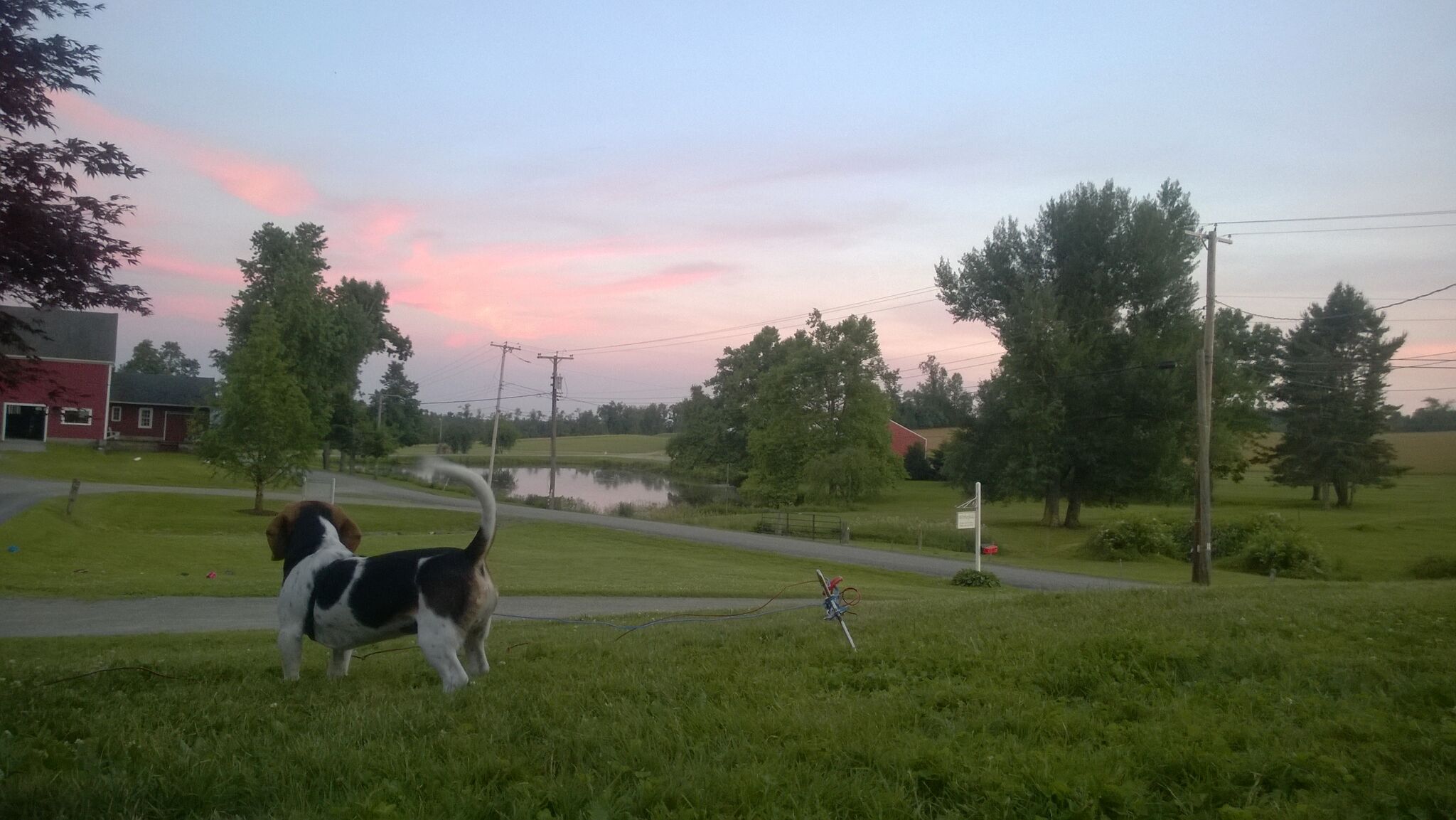 My father plods around our small apartment, the rooms arranged in a square, the center of which is the staircase up from the garage below. He’s 72 and has taken to wearing only boxer briefs anytime he is at home, stripping his other clothes off moments after he gets through the door. He still works 40 hours a week on graveyard shifts. Seven years have passed since he started fighting cancer. He’s singing the words Life’s a bitch, and then you die at a high volume because he’s going deaf and he wants to hear his own reaffirmations. He told me and my brother he’s done living once we move out. He wasn’t threatening us. He wants us to flourish and move out, stepping into our own lives. He wants us to love him enough to let him shoot himself.

The man and I step out of the stall barn, our chores finished.
Diesel exhaust reveals our breath in the morning air.
In these summer months, we wear long-sleeve shirts
until the sun has eaten all the dew off the grass.
He stops me before we part ways, raising
his voice so the lowing of the warming
tractor engines won’t dissolve his words.
I’m sorry I been a real mean pup the last few days,
he says. Had two teeth that needed to come out,
but I got liquored up last night and pulled them.

I tell him it’s all right.
I know he
pulled the teeth himself, leaning over his kitchen sink
and reaching into his mouth with pliers, his hand
aided by his blurry reflection in the window
and the hot-nail burn ripping up through his face
when metal connected to teeth rotted to the pulp.
I know he did that.
What I want to know is
whether he smoked a Marlboro Red down to the butt
before he lifted the pliers off the counter.
Whether he put his back to the cabinets after
and lowered himself to the floor.
Whether he pulled a damp bandana from the sink’s edge
and bit down with one side of his mouth while he opened
a can of cheap, chilled beer for his ablutions of the other.

But it’d be out of line to ask him.
He’s the sort of man who was handed
a knife when he was a child and told
he was a block of wood, and it was
time to start carving himself into a man,
and so he did, and he learned to be
a master sculptor, the sort no one
will know or remember, and he
will ask no one to celebrate him.
I cannot ask him to bare his chest
so I can swing a splitting maul at it.

I must choose to be satisfied
with the ceremony of mid-morning breaks.
He sits in his chair in the shop and lights a cigarette
with hands tanned the brown of tree rings’ summer growth.
I sit on an overturned bucket.
The farm manager leans back in his chair,
puts his feet up on a bucket of hydraulic fluid,
and tells us how he picked up a woman at a bar
the night before and slept with her in the bed
of his dump truck, and his story becomes part of the air.
Across the farmyard, pigeons stir and fly out of a barn cupola.
On some days, we hear
the mewling of newborn farm kittens,
and on some days, we hear the pigs scream
like they know they’ll soon meet the butcher,
and on some days, rain falls and brings news
of a farmer crushed between
his hay wagon and his tractor.
We greet each of these with silent reverence,

and then the day goes on.

The church I went to as a kid has been desacralized.
Jesus said For where two or three are gathered
in My name, there I am among them, but I suppose
the Church asks him to leave if two or three are
all he has. The sanctuary lamp was extinguished.
Before I stopped attending mass, I looked to see
whether the lamp was still burning each time I went.

Last night, I dreamt I was there, kneeling at the edge
of the chancel as the priest genuflected before the altar
then rose to put out the flame. A column of smoke
stretched and swirled when he lifted the silver damper.
The smoke disappeared before reaching the ceiling.
I cried, but I could not tell whether I did so
over the past or for the future.

Donovan Borger is the recipient of an Academy of American Poets University and College Poetry Prize and a Fulbright grant. His work can be found online at poets.org, Ragazine, and Swamp Ape Review and is forthcoming in Sugared Water. You can find him on the ramps of the Guggenheim, where you can ask him about the art.