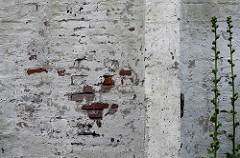 By SUSAN KINSOLVING
A war surgeon, he saw all losses: life being
the larger part; limbs the lesser. Legs hanging
from trees; on the field, hands disarmed.
Teeth missing; toes afloat in a bucket of blood.
A competent carpenter, he sawed and drilled,
pulled with pliers, hammered and hacked.
Much symmetry was skewed, gaps and gapes,
the glaring absence of an eye, gouged
and gone, bulging on the tip of a bayonet
or staring up from the ground, its final site.
Paré didn’t like the look of it; being French,
he began to paint. On tiny metal discs, covered
with chamois, he made the marks of a pupil,
and soon became an artisan, attending to the iris
and its color wheel. A cord was tied around
each patient’s head to keep the enameled artifice
in place. Paré called his creation an Ekblepharon,
eked from the Greek. He also sculpted hands and feet,
bringing such pieces to the maimed men, offering his eyes
as a new point of view, an ultimate trompe l’oeil.