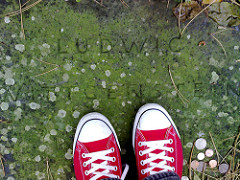 Translated by THOMAS EPSTEIN
Wittgenstein’s been in paradise for a while now. He’s probably delighted
Because the surrounding rustle reminds him
That the rustling that surrounds him does not speak of,
Is not an example of that which must be “shown.”
It’s agonizing, because he can’t remember some sentence.
Upsetting too, because reason is in no condition to “grasp”
The border between absorption and the knowledge of absorption. Erfassen.
The sentence has been forgotten although he knows that all of them know it,
Although they too have forgotten it, indeed none of them know
That the sentence, which did not arise in paradise, is doomed to appear–and if
In paradise, like the fullness of language it will constantly strain
Toward its own borders, the sentence providing only form,
That is to say shadow without the light’s source, but
Oblivion is modal, formed of strata to produce
An expanse in which something is to be known.
Thus something other is added to what is unknown.
For example, we know that Wittgenstein (Ludwig) is in paradise.
Also, that the body can neither be described nor shown.
Gazing back Wittgenstein can see, in violation
Of the law of perspective, Virgil emerging by his shoulder.
There appears to be someone next to him. It’s still drizzling.
It hasn’t yet begun. Naturally the question of the sentence,
The undoubtedly important sentence comes to Wittgenstein,
But its absence does not so much tear at his lips
As silence him. Yet surprising himself he asks:
«And how’s Trakl getting along?» After a brief pause:
«He’s not there, where we are.» And Wittgenstein writes:
«The pleasant difference of temperature among the various parts
of the human body.»
This too is probably remniscent of something, tattoos in the sand,
Or the surrounding rustle, which speaks nothing – to no one.

Arkady Dragomoshchenko was born in Potsdam, Germany, in 1946, grew up in Vinnitsa (Ukraine) and moved to Leningrad in 1973, where he has lived ever since. Prize-winning poet, prose writer, translator, and editor, he is the author of numerous books of poetry and prose, several of which have been translated into English (Description, Chinese Sun, Xenia, Dust). Having come into close contact with American poetry (and poets) in the 1970s, Dragomoshchenko has translated the poetry of Lyn Hejinian, Robert Creeley, John Ashbery, Michael Palmer, Charles Olson, and others.  His own latest collection of poetry, Tavtologiia (Tautology), was released in 2010.

Thomas Epstein is a translator and writer who teaches at Boston College. He is editor-in-chief of the online journal New Arcadia Review.