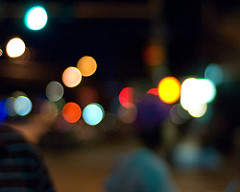 “as the camera moves
through the streets of the Mexican border town
the plan was to feature
a succession of different and contrasting
Latin American musical numbers—
the effect, that is, of
our passing one cabaret orchestra after another. In
honky-tonk districts on the border,
loudspeakers are over
the entrance of every joint, large or small,
each blasting out its own tune
by way of a ‘come on’ or ‘pitch’
for the tourists. The fact that the streets are
invariably loud with this music

was planned as a basic device
throughout the entire picture. The
special use of contrasting mambo-type rhythm numbers       with rock’n’roll
should be developed . . . also
either the shot itself,
or its placing,
should have

Note: The poem’s language has been fashioned out of Orson Welles’s December 5, 1957, lengthy memo to Universal Studios. The preview version that Orson Welles saw of his film occasioned a fifty-page passionate objection to the studio’s butchered version of it.

ShareTweetEmailPrint
2013 Issue 5 Issue 5 Poetry Jon Thompson poetry Poetry Recordings
Borderlands, or Where is the Source of Corruption? (Touch of Evil)05.01.2013