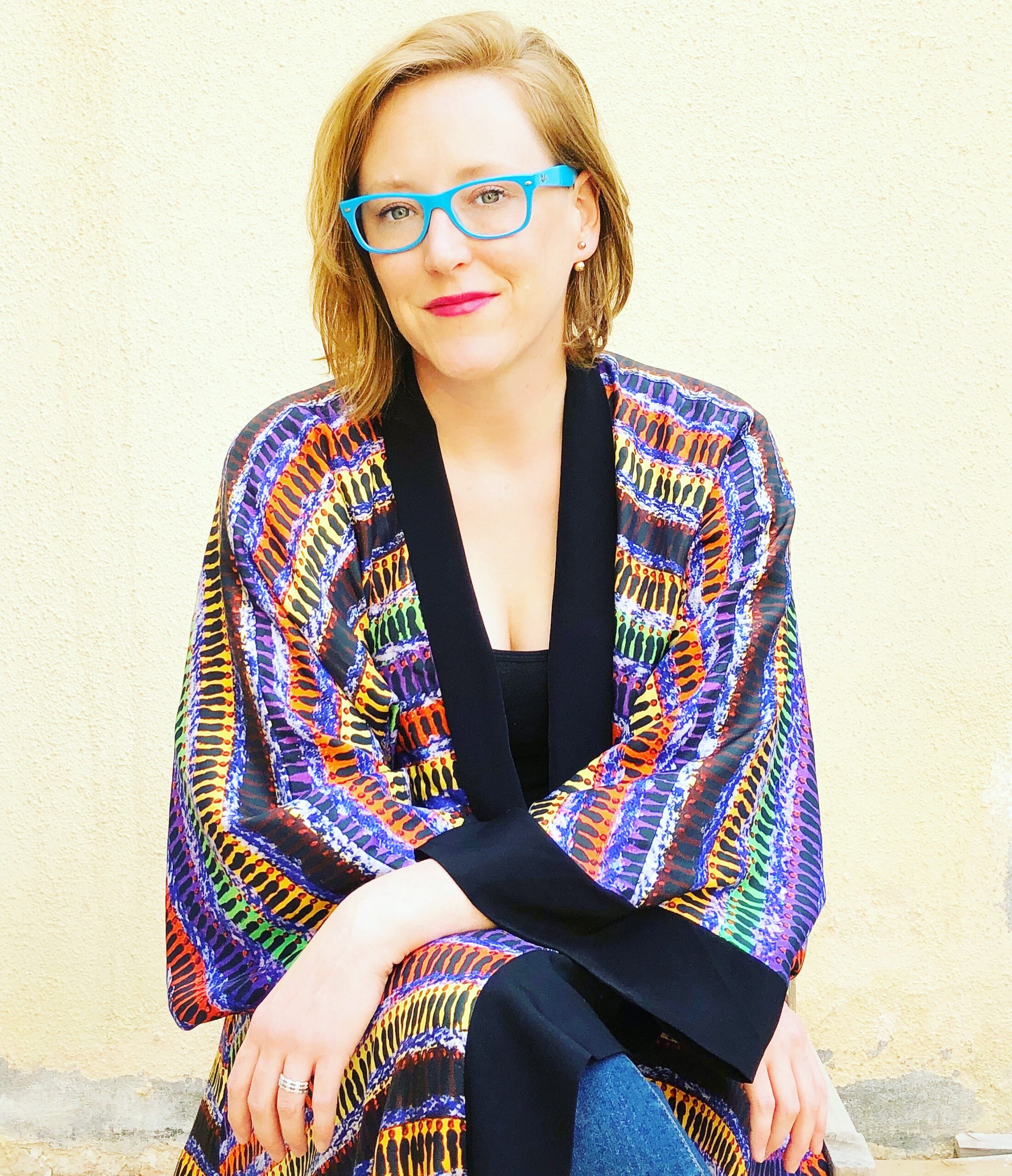 Natasha Burge is a finalist for the Restless Books Prize for New Immigrant Writing.

A strikingly original exploration of autism and psychogeography, Natasha Burge’s Drifts takes us through the souks, caves, and sands of the Arabian Gulf to create a loving and sensorial meditation on place and transcultural identity. In gorgeous poetic prose, Burge probes her unfurling awareness of autism, connecting seemingly tangential thoughts and wanderings with the anchored histories of the Arabian Gulf. The scenic and descriptive power of Burge’s writing is remarkable, bringing to life vivid landscapes, city streets and markets, desert sunsets, and unseen waters flowing beneath the earth.

An editor suggests I write about being an alien. This word I like, with its superabundance of meaning. It reminds me of visa stamps crowding an already full passport, of space shuttles and star dust and loneliness. It rings true.

I tell her about skoliogeography, my new secret something. Skolio, from the Greek word for twisted, and geography, meaning earth writing, a crooked psychogeography for the weird 1%, drifting away away away from the center. It rings truer.

She suggests I write about the development of this theory, this crooked psychogeography. She wants to know how it came to be. Trajectories, she mentions, timelines, something linear and accumulating.

But it is not a theory, I explain, but a deviation that insists on our surreal right to seek the marvelous, indeed, even the miraculous, in the mundane. Wherever I position myself, I say to her, there is a temporary autonomous zone where neurodivergence prevails, an insertion of alterity that can, inshallah, generate ripples of slantways thinking, disruptive, quixotic.

We are told we must articulate elaborate schemas, but I tell her there is something to be said for the stubborn insistence of simply being who you are, where you are. And then, from my skull, I pull out a tuft of cloud, limned and yielding, and I present it to her.

Here I am, the child on the beach.

Her head craned back, her fingers dancing nonsense, she looks up and up into the blue blue sky. Something is about to happen.

Something happens: a purling in the distance of dense shadow, a sharp wind that brings a fury of grit to scour her skin, to sting her eyes, to make her parents, in the distance, shout.

It is a shamal, a vast storm of sand and dust that has roared its way across three deserts to reach the eastern edge of the peninsula. In an instant, gone is the sun and the horizon the shouting parents and the blue blue sky.

Suspended in the shamal’s density of airborne earth, the child is alone in the squall, with nothing to separate her from the sand and the sky and the raging wind.

It is my earliest memory and I remember a strange and soaring joy.

There is boomtown energy on the pavement tonight. Densely clustered bodies crowd the curb, vehicles scoured by sand slide past, and the electric clatter of neon is always in the eye. I walk in the cut from light to dark in a time of furious economy; overheated people rush home after work or rush to buy groceries for dinner or rush to visit the mosque for prayer. There is a honk from a taxi behind me, a fume of squalling cats, the sizzle of lamb fat on a spit. A stray elbow nudges me into a shop window; I see Wedgewood crystal and vacuum cleaners and piles of snaking rubber tubes. And up, up, hanging from the ceiling there is a trio of dolls with black eyes swaying. Around the corner, in the direction of the corniche comes the scent of the sea and the smell of something burning.

It is night but the heat of the sun is still sighing off the street and the asphalt is warm through the soles of my shoes. I have sweated through my bra and my socks and even the filmy fabric of my abaya is damp and clinging to the skin at my throat. In the crowd I am a stranger and so I can walk in perfect solitude. In this part of the souq they sell raw meat and fresh roses and small birds that tremble in baskets made of wicker and straw. To my right a hawker chants about his cumin, his cardamom, his limes, his cinnamon, his saffron. He pinches something dark between his fingers and tells the crowd to smell. A man leans out of a shop – sister do you want a scarf? I’m already wearing a scarf over my hair but mine is black and the scarf in his hands is a shocking yellow corded through with sequins. The building on the corner is covered in fliers needing roommates: Pinoy wanted, Pinoy only, Pinoy required. Walking on, I repeat the fliers to myself, the bouncy globules of their consonants, the insistence of their demands, the disparate perfection of their vowels.

The glorious street is glorious in its chaos and jumble of shapes and speeds and times, the slow and the fast, the crooked and the straight, the tall and the stooped, it is all here and in being here it is glorious. A tall man emerges from a tailor shop in a thobe of blue – the shock of it. Never before a thobe like this. Amid a sea of white cotton this thobe is the sky distilled, a rogue wave coursing the shore, an indigo so irascible that people on the street stop and stare. I stop and stare. Someone lifts their phone to sneak a picture. As he passes, there is the urge to reach out and grab a corner of his sleeve, a flapping lip of hem, to ask why.

Khobar was a humble fishing village until oil, discovered by American geologists in 1938 at nearby Dhahran Well No. 7, changed everything. The village became a town became a city, digesting soil and distance, blooming arteries of asphalt and speed to support the infrastructure of the burgeoning oil industry. Into the new airport flowed workers from around the world, so to this day Khobar remains the only city in the Kingdom where expats make up a majority of the population.

Rounding a corner, I come to a street lined with Gujarati restaurants and Philippine bakeries. If I angle my head to the left, the smell of curry and onion; to the right, yeast and sugar. Around the corner, a residential street of homes built in the 1960s. Classic Gulf vernacular architecture, the houses fill up their plots entirely, leaving a scant few inches between the towering garden walls covered with crushed glass and the windows of the homes. It is a Khobar street and there are the things of the Khobar street: the hungry cats with their weeping eyes, the honking of cars on the curb, the frenzy of the crowd, and the night sky with its paltry handful of stars. The ruhh al sakan of this block, of this neighborhood, of this city, is one that demands speed, and so I walk faster and cut across streets, winding myself deeper into the night. I have walked this city for nearly four decades. I was born here and I learned to walk on these streets, in the dim back alleys and crowded sidewalks, and I have never stopped. Something inside of me, fomented in some subterranean passage, says go – and I do.

A galvanizing failure: I tried to write a book of facts, a dispensation of needful information about my obsession with the ancient, about the Assyrians, the Dilmuns, the Parthians, the Babylonians, the Jabrids, all of the people who called this land their land before those of us here now called it our land.

I wanted to chart the flow of people and tongues and cultures and gods over the millennia, all of them passing through the Gulf, blending and folding into one another, becoming one another. I wanted to trace language and tradition through manufactured borders, pushing aside fact to find the truth, the truth that we have all been someone else before. I would make of this a battlement, a bridge, a seduction. Together we would study the ancient and realize that the scope of time erases all things, that in a thousand centuries everything is rendered meaningless and we can see through skin and bones like windowpanes.

This book was something akin to memoir. Within it I wanted to drift and discover. But the more I wrote of it, the more I realized that my memories were unstable, that in each visitation a new detail would rise to prominence or recede into the fog, so that my past was a continually original place.

What’s more, as I wrote, I realized I didn’t want to exist on the page as a thing that was fixed or certain. More than anything, I feared being definitive. After all, our borders are porous and the light that filters through our liquid depths is mottled with motion. I wanted to reserve the right to change, to become something never seen before. I did not want to be owned by a single word.

Natasha Burge was born in Saudi Arabia, where her family has lived for three generations over 60 years. Still living in the Arabian Gulf, and writing on transcultural identity and transcultural space, she is interested in exploring stories that emerge from the interstice. She was previously the writer-in-residence at the Qal’at al Bahrain Museum. After earning an MSc from the University of Edinburgh, she is now in her final year of a PhD program at the University of Lancaster. She has published short stories, poetry, journalism, and essays, and her writing has been anthologized, nominated for a Pushcart Prize, and translated into Arabic, Chinese, and Japanese. Natasha’s unpublished novel, The Way Out, was longlisted for the 2020 Dzanc Prize for Fiction.