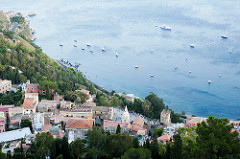 When the buried volcano erupted,
sulfuric smoke leapt from the Sicilian sea,
seeped through locked, felt-lined chests,
blackening the silverware.

It was like rage—flames and letting go,
the sea a bubbling cauldron of dead fish,
a bad taste in the mouth.
An islet rose from the depths—

not glittering Atlantis, but a desolation
swiftly spreading like news of its strange
arrival.  Who can know why four nations
would stake claim to a stark mile

of tufa and pumice, what a naval surgeon called
“unhallowed ground”? Even the gulls fled,
screaming, but not the scientists, dreamers,
adventurers, curiosity-seekers,

Like a wine connoisseur, someone sipped
the water of its two ponds, living to pronounce
the red one “salty, spicy,”
the yellow one “sulfuric.”

By December, the ghost had vanished
to a smudge of shoal with a new British name.
Soldiers and sailors returned home.
Contessas reclaimed their silver spoons.

Maria Terrone is the author of two poetry collections, A Secret Room in Fall and The Bodies We were Loaned, as well as a chapbook, American Gothic, Take 2.