Raed Rafei (RR): Your story “و/Waw” (“And”) talks about a society where everyone is spying and being spied on at the same time. Both spies and their targets seem to be victims in this system. What inspired you to write the story?

Colette Bahna (CB): I wrote this story based on an old memory that stuck with me from the 1980s when I worked at a media institution. Back then, I was aware that every time I picked up the phone, there were a “thousand ears” listening to me, which seemed obvious given the sensitive position of the media establishment. Sometimes, I felt that someone in particular was listening to me specifically, maybe because he was seduced by my voice. I could feel him breathe whenever he heard me. Sometimes, I said harsh words aimed at him indirectly. I thought about this for years until I finally decided to write a story that eventually took a masculine turn. I used characters with distorted body parts, like big ears for eavesdropping and big noses for smelling, as metaphors for the abuse and instrumentalization of bodies by secret services.

The story was written at a time when tapping phones was the only way of eavesdropping on people. Nowadays, there are many technologies for spying, and anybody from anywhere can hack into personal emails or social media accounts. People are at the mercy not only of their local secret services but of a myriad of international spying agencies and informants via satellite and other technologies.

Everyone is naked in the face of the monster of modern technology.

RR: What compelled you to give “و/Waw” a male protagonist, and to set it in such an overtly masculine world?

CB: I would say that most of my stories feature men as main characters because they are usually allowed more freedom to circulate in our societies. Men are central in the cycle of violence. They experience the violence of the system and of life and are in turn violent with women and children. I am also not a traditional woman. I’ve had a tough life and was forced to take on many responsibilities. Maybe that’s why I usually, unconsciously choose to give my stories male narrators. It’s not that I am not concerned with women’s issues, but my stories deal with life irrespective of the sex of its characters. They are also universal, in the sense that they could happen in any society under dictatorship. The story of “و/Waw” resembles the plot of The Lives of Others—the German film that received an Oscar some years ago—even if mine was written years earlier.

RR: Your stories expose the multitude of threads that create interdependence among the different strata of people in a society. They seem to reveal the hidden links that make people’s destinies—within a particular political, social and cultural system. Can you talk more about this?

CB: Do you remember Babel? This film answers this question with its simple and wonderful idea: through three seemingly separate stories, each revolving around a different set of heroes and events somewhere on this earth, we are led to realize the extent of interdependence between everyone. What this confirms is the existence of the links, sometimes hidden, sometimes overt, that create the political, cultural, or social mesh of life. Just look at the Tunisian revolution at the end of 2010 and how its effects have generated events in most Arab countries.

Banks going bankrupt in the US affect simple peasants in a Lebanese village.

The revolution-turned-war in Syria led to economic and political consequences everywhere in the world. We live in an age where destinies are interconnected. Uncovering the mysterious systems that link our lives together is not impossible for a writer. It’s actually an exciting task.

RR: You started producing literary work before the revolution in Syria, at a time when freedom of expression was restricted. Nevertheless, your writing is very bold. How were you able to write with such courage in an environment that generally does not allow criticism?

CB: I don’t believe that there are times when freedom of expression is allowed and others when it’s forbidden.

Freedom resides in one’s soul whatever the era is. There are always exits and windows that allow one to breathe. I try to find alternative ways or, what I call alleys, to convey my messages. If you noticed, my stories are not restricted to certain times or even places. Their characters are not specific. When the reader knows that I am from Syria, they might link a story to a Syrian reality. But in fact, they are stories that can happen anywhere and during any period.

Poverty exists everywhere, and the character of the despot and tyrannical regimes are not restricted to one era. In fact, today it’s harder for people to express themselves. Whatever you say in social media can be used against you by anybody.

In all cases, I don’t use direct reference in my stories—they are metaphorical. For instance, the short story, “Khofo,” about the death of the pharaoh as a symbol of fear, was linked to the passing of the former Syrian president Hafez Al-Assad. But it was just a coincidence. The pharaoh as a symbol is very old, and fear of the ruler has always existed—and will always exist.

RR: Indeed, metaphors and myths have been always used as an indirect way to address reality. Can you elaborate on your style of writing and your sources of inspiration?

CB: It’s true that symbolism can help one tackle a difficult reality.

I don’t follow one specific style of writing. Every story has, like a newborn, its own identity. As I write a story, its features slowly take shape from within it. A story is born in my head as a sparkle and as I start composing it, I am surprised by the turn of events and the shape its characters take.

I struggle more with beginnings than with endings. I am always looking for the beginning that will hook the readers and excite them. Endings are usually rife with surprises. I like shocking endings that leave an effect on the readers’ memory.

I have always been an imaginative person; since I was a child. I let my imagination run wild in my stories. More than twenty-five years ago, I wrote about a woman who looks for a man who would never cheat on her and finally decides to marry a robot. She convinces everybody that the robot is the only man she can program as she pleases. Recently, some people started actually marrying robots and holograms. I read about a Japanese man who married his favorite doll because she never ages or cheats on him.

RR: How have your literary writings developed since the revolution?

CB: I haven’t written any fiction since the revolution. It has been difficult. I have tried repeatedly to write stories and failed—perhaps because serious and painful events still weigh on my soul. Many thoughts boil inside me but have not found an outlet yet. Perhaps because I believe that the revolution is not over yet, at least inside us. I feel it is still too early to write critically about the revolution. We need more distance to write more clearly and objectively about it. Most of what has been written is a documentation of events and resembles Facebook posts. Few writers have managed to write novels that are deep and analytical. I still write journalistic articles about public-interest issues and tragic events. It is a heavy task to try and alleviate people’s suffering and provide them with a sliver of hope, or at least show sympathy and support.

RR: Many Syrian writers, artists and intellectuals are scattered around the world today, but you decided to stay in Syria despite all the difficulties and dangers. What does it feel like to be a writer in Syria today?

CB: Yes, I chose to stay, despite all the risks, and I still feel that I am in danger at any moment. I didn’t stay for heroic reasons or for big slogans. I stayed because the country is at a historic crossroads that will not be repeated during our lifetime. I felt the need to live all the details of this moment, to take in all its smells and endure its wounds from as close as possible. As a writer, my memory is working intensely in the current circumstances. My readers appreciate that I remain among them, suffer like them, and did not run away. I am understanding and respectful of those who had to leave because of their circumstances but I repeat that there are ways to stay and remain relatively safe. The past years have been very difficult, but I have gained a lot of experiences that have deepened my vision and my understanding of life.

Your question has stirred my emotions and reminded me of the pain we have been experiencing. I feel so tired. I hope that at the end of this suffering, there will be justice. We have paid so dearly for that justice. 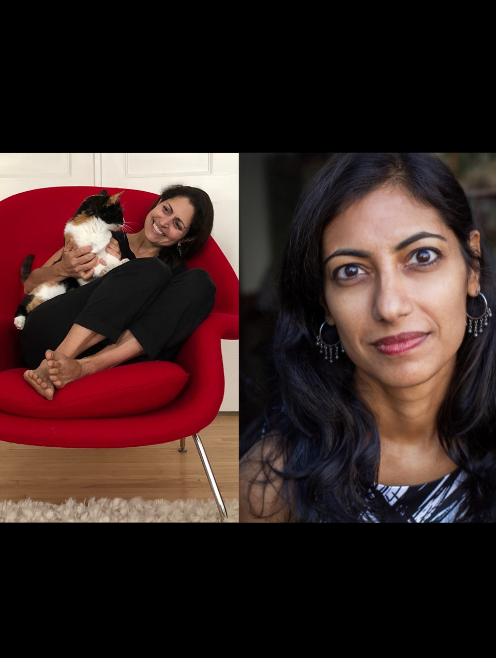 Connection, Collaboration, and Community: An Interview with Kirin Makker and Sejal Shah

SEJAL SHAH and KIRIN MAKKER
“I am a reliable witness to my own experience”—a line from Lacy Crawford’s Notes on a Silencing—has become a refrain in Sejal Shah and Kirin Makker’s friendship.