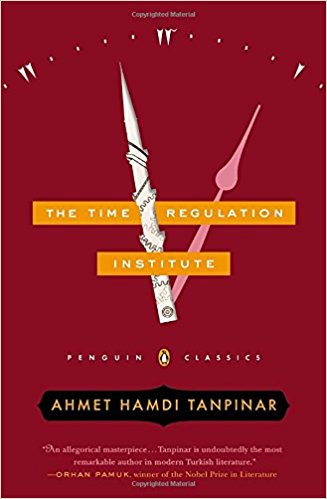 Whether you’ve already read Issue 14 twice or you’ve been stealing guilty glances at the untouched copy on your night stand, enjoy a little bonus content from our Issue 14 contributors! This month, our recommendations probe the supposed linear formation of our lives by questioning how we conceptualize our tasks, societies, and time itself. Poetic, comedic, and tragic, these reads shed light on contradictory forces often taken for granted.

Recommendations: The Time Regulation Institute by Ahmet Hamdi Tanpinar, Steal Away by C.D. Wright, and Ordinary Beast by Nicole Sealey.

Ahmet Hamdi Tanpınar’s The Time Regulation Institute is a delightful satire of modern bureaucracy and the forced Westernization of Turkey to occur after the fall of the Ottoman Empire. At its head is Hayri, the co-founder of a made-up institute that handles the resetting of all clocks in Turkey with an absurdly hilarious system of fines and rebates. Hayri’s entourage-turned-bureaucrats include a diplomat of a now-defunct Ottoman nobility, a psychoanalyst who insists on the German style of psychology as the answer to life, a society of mediums who believe they have phone calls with the dead, a half-resurrected aunt, and a Greek pharmacist dabbling in alchemy. This novel is born from the chaos of Turkey after the fall of the empire and the rapid Westernization of Atatürk’s policies. During this time, the dazzling ethnic variety of Ottoman culture was suppressed in favor of distinctly Turkish notions in order to bolster the confidence and security of the newly formed, and susceptible nation, bringing with it a slew of dichotomies (East/West, Present/Past, Progress/Stagnation, Turkish/non-Turkish). But for Tanpınar these binaries exist as the whole of an individual—there is no Turkey without its Ottoman past and its European future; there is no Turkey void of its multicultural components. Through Hayri’s absurd adventures, we come to understand that time is not some vector that runs in a linear scale away from the center point of European progress to the backwater infinite. Time is a place of coalescing, infusing the past and the present. In truly Ottoman terms, The Time Regulation Institute achieves this sense of blend through equal measures of craft and content. The outcome is a novel about separateness told in the most amalgamated of nonlinear styles by and about those that think of themselves as stark exemplars of this Turkish duality but are in fact fluid and multi-faceted renditions of a country whose varied identity couldn’t be suppressed no matter how invasive the construction of its new narrative is in the social conscious.

I spent the past two days in bed with an earache. Cotton ball in ear, I read poetry. I admit I read poetry only every so often, and even then I tend to read the poems I have always loved, poems I adore for uneducated reasons. Poems I find myself repeating while doing laundry or walking to work for no other reason than they feel like spells. I’ve longed loved C.D. Wright (after discovering a line of hers scrawled on a bathroom wall) but only encountered her poem “Living” a few years ago after she passed away suddenly. “If this is Wednesday,” the poem begins, “write Lazartigues, return library books, pick up passport form, cancel the paper.” What follows reads like a to-do list, an anti-lyric, and yet it’s the rhythm that sustains it. We fall into the poem’s strange beat, as we do our lives. “Meant to tell F this morning about dream of eating grasshoppers, fried but happy. Our love a difficult instrument we are learning to play. Practice. Practice.” This is living in its tedium, its bafflements, its absurdities and regret. Wright shows how beneath the surface of the mundane, the pattern of days, shines the numinous. And then there’s the final couplet: “If this is Wednesday, meet F at Health Department at 10:45 for AIDS test. / If this is Wednesday, it’s trash night.” I love the creep of ontological uncertainty with the repetition of if this is, the last two words recalling Hopkin’s reminder that we are all just mortal trash. As she says in the poem, “Living is strange.”

“I want/to learn how to make something/holy, then walk away,” Nicole Sealey writes in Ordinary Beast, her exquisite debut book of poetry. The line arrives at the end of a vivid, visceral poem about the construction of an mbari, a mansion of dirt and bone china built in honor of Ala, the Nigerian goddess of the earth. As workers set piles of wood ablaze around the offering, Sealey muses: “The West in me wants the mansion/to last. The African knows it cannot./Every thing aspires to one/degradation or another.”

This tension—between decay and permanence, longing and acceptance—echoes throughout this extraordinary collection, which spans the personal, political, and philosophical to ask what endures, what doesn’t, and how we can tell the difference. (It is surely no accident that the book ends with a poem titled “Object Permanence.”) Sealey, who was born in the U.S. Virgin Islands, is particularly concerned with blackness, privilege, and the violence that haunts both, crafting sly puzzles of poems that reveal themselves only in their final lines. But she is adept, too, at juxtaposing moments of gravity against poems of sublime levity, whose wordplay sparks and leaps in the mouth ecstatically. The result is a collection of uncommon grace and subtlety—a work that lingers, indeed, long after you have walked away.