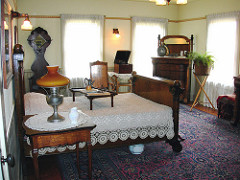 “The garden is here in the middle of your bedroom,” she tells him, unbuttoning her mandarin orange blouse, then giving up and raising her arms in the manner of (he thinks) the Spaniard before Napoleon’s firing squad. He steps toward her and lifts the blouse over her head. Kisses her throat and full, pale breasts. The Third of May 1808. Goya was, at the time of composition, a deaf widower living with his housemaid in Madrid. With the flat of her hand, she pushes him back onto the bed, then kneels between his legs and begins to undo his belt. Nevertheless, he wonders if Goya had, before his stroke in Bordeaux, looked affectionately back upon his old pain in the silent metropolis, searching for pleasure (he imagines) like a blotch of darkness among the tomatoes and grapes and pure Andalusian horses. She gathers up her brown hair and knots it. Takes him into her mouth and cups his testicles. Goya said: “I see only forms that are lit up and forms that are not.” He remembers, then chooses to ignore, the mark of stigmata on the Spaniard’s right palm. With eyes half closed, he can see the silver, early-nineteenth-century moonlight swimming through her hair.