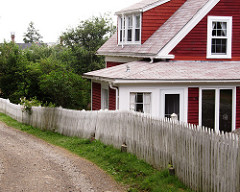 I’m chatting away merrily to his back
About how my grandmother worked here
As a nursemaid. Little changes
On an island. Look, a goose girl
In a floppy bonnet, charges honking.

I follow him just as I follow
In her footsteps, leaving behind
A fist raised like a gust of wind
For the generous wingspan of an eagle,
Stillness moving, gliding silence.

2. domesticity
As a spider anchors the threads of home
Beneath the fingernails of pinecones,
So, they say, the fairies plant themselves
In between and under roots and rocks,
Glean a life from the glut around them.

Like dewdrops in a morning glory cup
They tuck up in their bijou dwellings,
Finely balanced twigs and moss and bark.
So, the hollyhocks in town lean over
Into a neighbor’s yard and talk and talk.

3. spies
There are no large mammals on the island.
Only man. A constant chirruping
Inflates the air. Insouciant birds
Float in my hair. I’m Spring but it
Is Fall, icy fangs about to bare.

We watch and watch as though hatching
That hen and chick, clucking, pecking
In a kitchen garden, so close yet they
Refuse to flinch, looking at us
Sideways. You are a very big man.

4. accounts
As if the miniscule but crucial
Dot on the letter i drifted
Off and landed as a self-
Sufficient island miles off from
The ruled ledger of the mainland.

A stout widower from Massachusetts
Pushed his way up into Maine,
The will-she-won’t-she’s of the coast,
The blank page of the ferry, all
To dot his i’s and cross his t’s.

5. tease
A monarch butterfly, a winged
Nasturtium flirt, Salome danced,
Then landed on me, blurted, “Hi!
I think I know you from the Great
Atlantic Flyway. Or was it our grandmothers?

Anyway, I’m off to Mexico.
I’ve never been there but remember
How to go. It’s time to give up
On the North, to swarm quiescent
On an Oyamel, be blossom still.”

6. exploration
When that impatient man came
On his urgent mission to ask
For her hand, did he at least pay her
The honor of exploring that island, which,
Even in her servitude, was home?

Did he get dizzy on her cliffs
(The height, the drop), lie back in her ferns,
Inspect her dappled moss, see himself
More clearly in that honest light,
Way out in the ocean, so exposed?

7. gold
Here painters paint painters painting.
To walk is pentimento. Nothing,
Not the basest weed, is innocent
Of art. Little wonder color daubed
By no man’s hand holds us in thrall.

Saffron lichen, sealing wax,
Stamped by a worn signet ring,
Branding this birch, this rock sovereign.
So one face can soften and anneal
Another. Strike a new currency.

8. clean
When my grandfather proposed to her,
White sails puffed their cheeks, bed sheets
In a wind. Dinghies scudded. Gull wings
Ironed every doubt to certainty.
Later, she would take in laundry.

Now it’s our turn, our first morning
On their island. Bleached light pours
From two directions in a corner
Room. The white, fluttery curtains
Offer little resistance to speak of.

9. saved
The sky was a blue baptismal font,
The ocean upside down. We swam
In it. We walked and never tired,
Floated side by side on our backs,
Whenever we needed to be reborn.

Like gulls around a laden fishing
Boat, almost sinking, chugging
Into harbor, we were fully fed
And on the fly, sped with the schooner
Clouds up to the edge of the earth.

10. rust
Dragon’s teeth, black, jagged rocks,
The bell buoy is an anxious mother,
Drop by drop, month by month
Bleeding, bleating her warnings back
Into the salty clarity of ocean.

But a grandmother’s an ivory scar
On an oyster shell, the gash long healed.
She smiles while the children clamber up
And over the giant lobster of a rusting
Hulk, paddle in the ferrous tide pools.

11. recidivists
You can marry the same person
Again if conditions are such you can’t
Resist the landscape changed but grinning
Home from ear to ear, the light
This far out kissing you all over.

We’re fairly skipping down the aisle
From the tame side of the island to
The wild. Waxwings flit confetti.
Warblers hold my veil aloft.
All migrating to where it is hot.

12. web
A scrub pine or a burning bush?
Depends on how you look at it.
One minute, a scrawny, naked waif
In the forest, next the chosen Christmas
Tree ablaze with blades of tinsel.

He wears a halo when he smiles,
Until his brow creases, furrows,
Cracks. The windscreen shatters. Light
Alone believes the web remains,
All those millions of resilient threads.

13. sage
White Head. A wrinkle from a glacier,
A lookout on a sun supine sea.
We ask a hiker if we’ve time
To scale another height. We mean
By dark. He answers, “Life is Long.”

Now, we’re neither here nor there,
Ferrying back to the mainland. Our boat
Creates the waves that drown the “i”
In island. It’s bitter up on deck.
I take your hand, feel everything between.

Peggy O’Brien is the author of two collections of poems, Sudden Thaw and Frog Spotting. She is also the editor of the Wake Forest Book of Irish Women’s Poetry and a book about Seamus Heaney and other Irish poets called Writing Lough Derg. She has spent half her teaching career at Trinity College, Dublin, and the other half at the University of Massachusetts Amherst.