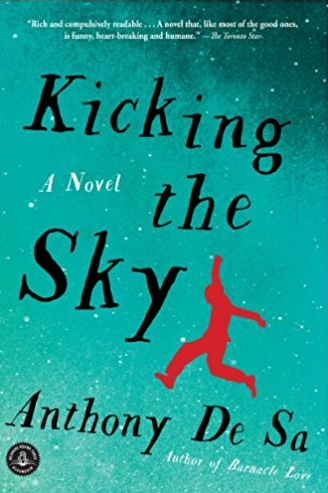 De Sa has emerged as one of the important literary voices of the Portuguese Diaspora. His first book, Barnacle Love, a series of related stories about Portuguese immigrant history, was short-listed for Canada’s prestigious Scotiabank Giller Prize in 2008.

The Portuguese were among the earliest European settlers along the east coast of North America and played storied roles in whaling and trade. But their numbers were relatively small and their distinctive culture has often been overlooked. In Canada, where the wave of immigration en masse did not occur until the 1950’s, the Portuguese settled primarily in the cities of Toronto and Montreal. Toronto still has the largest population of Canadians who claim Portuguese heritage.

As in Barnacle Love, De Sa recounts the story of the Rebelo family, though this time from the point of view of twelve-year old Antonio. The year is 1977, when a young boy from the community, Emanuel Jaques, disappeared, then was found dead in an area of Yonge Street filled with adult shops, strip clubs, and massage parlours. An eager, enterprising boy, he had worked at a shoe shine stand in a Portuguese neighborhood,  then moved on to Yonge Street where he believed he could make more money. He was saving for a family trip. The move had tragic consequences. Strangers lured him with a promise to pay $25 for helping to move camera equipment. When his body was found four days later, investigators determined that he had been repeatedly raped, then drowned.

Emanuel Jaques’s murder and the investigation are the backdrops to Antonio’s coming-of-age story. As in Barnacle Love, De Sa’s strength as a writer lies in character more than plot. This story takes us through a year in the lives of several Azorean families who live on Palmerston Avenue in an area of Toronto known as Little Portugal. Antonio and his two best friends, Manny and Ricky, become blood brothers, nicking their thumbs then pressing them together to seal their pact. They spend their days roaming the alleys on their bicycles and leaping across the rooftops of the garages in the laneways. They relish in their freedom and the adventure of long summer days. But everything changes with the disappearance of Emanuel Jaques. Parents become fearful and start locking their doors. When Antonio’s mother restricts his outings with Manny and Ricky, he sneaks out when she’s at work. The boys devise a plan to look for Emanuel and imagine they’ll find him, and they’ll become heroes. Then their lives can go back to being normal. Before they can carry out their plan, Emanuel’s body is found and details of his murder emerge.

The brutality of the murder haunts Antonio. His community becomes fearful for its safety. Antonio joins a massive march to City Hall where the Portuguese demand answers from politicians. The quiet, hard-working, obscure Portuguese community turns against the government for “failing to protect our children,” calls for the return of capital punishment, and finally turns its hatred on the homosexual community. De Sa’s portrayal of the homophobic hysteria that ensued is believable and disturbing. The reader knows the anger is misdirected but understands the community’s desire to blame someone for the senseless loss of a child. The immigrant’s bitterness comes through when a community leader says in a radio interview: “We build their houses. We clean their houses. We mind their children. For what? For this? For them to do this to one of our children? This is not why we came.”

In the midst of the fear, hatred, and confusion, Antonio and his two friends try to live as they did before Emanuel’s murder, but the city around them is changing. James, an attractive, mysterious twenty-year old, moves into the neighbourhood and lives in a suite in one of the garages in the laneway. The boys are drawn to him and use his place as a hangout. Later, they give him money and sneak food for him from their homes. Antonio’s mother cautions against spending time with James, which only makes him more enticing. There are a few sexually charged scenes when Antonio realizes that he is attracted to James, but he cannot examine his own sexual identity when his community is rallying so vehemently against gay men.

In Antonio’s neighborhood, parents work too hard and too long, neighbors spread malicious gossip, and dysfunctional families come apart under the strain of reconciling new and old ways of life. De Sa weaves sex, drugs and violence throughout, and the story gets darker with each turn of the page, leaving this reader wondering how so many troubled people ended up living on the same block.

There’s Agnes, a 15-year old who is raped by her step-father, then beaten and abandoned by her mother; there’s Ricky, also abandoned by his mother, who supports his drunkard father by giving blow jobs for five dollars each at the local pool hall; there’s Manny, the third in the trio of adolescent friends, who steals and sells bikes, then gives the money to James; and there’s Aunt Edite, actually a cousin—a sensual, cigarette-smoking, wine-drinking free spirit—who comes to Toronto from the States to escape the pain of her son’s death. There are loveless marriages, domestic violence, superstition, infidelity, child abuse, prostitution, rape, and murder. So much sadness intertwined in the lives of so many people.

De Sa’s development of the characters of the Rebelo family is masterful. It’s easy to see the world from their eyes and empathize with their actions, even the father’s off-the-wall decision to promote young Antonio as a healer after he finds what looks like an image of Jesus on a limpet shell. (The limpets were a special birthday meal.) Word gets out, and one day, Senhora Rosa touches Antonio and claims to be healed of her arthritis. Antonio’s father builds a shrine and puts his son on display, against his wife’s wishes. Pilgrims come from as far as the U.S. to see the healer who saw Jesus in the limpet. His hours in the shrine are extended to accommodate the multitudes, and Antonio begins to think that the charade will never end. Only when the local priest asks for a cut of the profits, and Antonio suffers a fainting spell is he relieved of his holy status.

Yet, there remains a host of other characters that De Sa did not craft into believable characters and whose actions are mysterious and jarring. For example, it’s not clear why Ricky starts giving blow jobs to men from the pool hall, or why Manny feels compelled to steal and sell bikes for James’ benefit. Antonio’s mother works at the hospital sterilizing instruments and, while we sense that she’s not in love with her husband, it’s hard to imagine a woman in her position falling into romance with one of the doctors, as occurs in the story. Least plausible are the two mothers who return to the Azores, abandoning their children at a time when the community fears for their safety. Paradoxically, de Sa’s narrative conveys the strong Portuguese drive to keep family intact and makes the abandonment seem even less in character. In depicting the harshness of immigrant life, de Sa relies too much on exaggerated stereotypes of the drunken, hopeless immigrant.

At times, the only light in this dark tale comes fromthe narrator, Antonio. His desire to make sense of everything and everybody is the gem in this story. Somehow he manages not to get into serious danger even though his two best friends are deep into it. His loving mother seems to make the difference. The warmth of the mother-son relationship is a constant thread in the novel and a central element of the story.

The book ends with the trial and conviction of Emanuel Jaques’ murderer, bringing closure to the fear if not the grief. The trio of boys breaks up when Ricky departs for the Azores, and Antonio leaves behind his childhood ways. Overall, it’s the strong women in his life—not only his mother, but Aunt Edite, and, to some extent, his sister Terri—who keep him grounded amidst the chaos of loss, death, and grief.

Kicking the Sky is a sad and complex tale. Reading it, I did feel transported to this time of tragedy and this struggling immigrant enclave. But for me, as a Portuguese-Canadian, the violence, child abuse, and pedophilia were overdone and compromised the story’s authenticity as a portrait of a people.

Esmeralda Cabral‘s writing has appeared in newspapers, magazines, and anthologies and aired on CBC Radio. She is a graduate of The Writer’s Studio at Simon Fraser University.