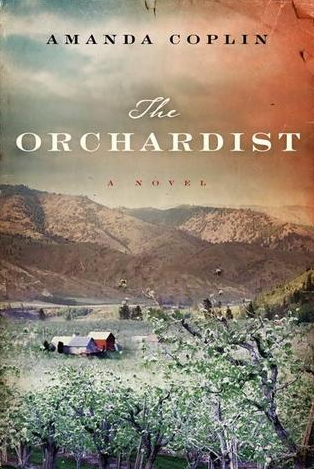 Amanda Coplin’s debut novel, The Orchardist, takes place in the Pacific Northwest, a land of dusty rural outposts, ancient forests, and cold deserts. We begin in 1900, in the fruit orchard of William Talmadge, on a farm his mother founded years before in Oregon Country by leading her children “north and then west, west and then north, as if drawing toward a destination already envisioned…”  There are rows of apple and apricot trees on this grand, but desolate, estate. Talmadge is a bachelor and an orphan. Talmadge’s solitude is heightened by the many years of his youth spent fruitlessly searching for his dearly loved sister, who went missing shortly after their mother’s death, leaving only her bonnet and basket as clues. This early trauma foreshadows the losses to come. Talmadge has only two friends: a mute Nez Perce man named Clee and a local midwife-cum-apothecary, Caroline Middey, who has long helped him with minor ailments and the embarrassing venereal afflictions of his younger days.

In the opening scene, Talmadge sees two girls stealing fruit from his orchard. No naughty, pink-cheeked maids filling apron skirts with apples, these girls are feral, sixteen at most, and hugely pregnant. They eat voraciously, protecting the food they’ve appropriated as lions might protect the carcass of a just-killed gazelle. “[O]ne girl clawed the ground with her fingers and brought a fistful of dirt to her mouth and ate it,” Coplin writes. They see Talmadge. The girls, whom we come to know as Della and Jane, are sisters. They approach Talmadge tentatively. He approaches them cautiously as well, sensing the fragility their ferocity masks. He begins to leave food out for them and soon develops a sense of duty toward the girls and their ominous shared condition. He and the girls enter into an unspoken understanding: he provides food for them; they allow themselves to trust him. Eventually, they move into his home. Della miscarries, while Jane gives birth to a baby girl.

Coplin uses this constellation of odd characters to begin a conversation about the construction of family, the relevance—or irrelevance—of blood ties, of what it means to take responsibility for another person. As the novel continues, we learn that the girls escaped the sexual slavery of a man named Michaelson, who continues to hunt them. Michaelson ends up on Talmadge’s farm, and we understand the depth of their fear as Jane and Della see Michaelson and his men approaching, Della and Jane decide to kill themselves together; only Jane succeeds, orphaning her newborn daughter.  Della survives the attempt. Talmadge buys Della’s freedom from Michaelson, but the fear that he’ll return haunts them until the end of the novel, when Della turns the tables and hunts Michaelson, intending to kill him.

Coplin, a Pacific Northwest native, has a lyrical voice that is reflected in the narrative sections of her book. The dialogue of her characters, however, is clipped, rough, not marked with indentations and quotation marks or set apart from the narrative text. Her writing forces readerly patience. We often sense that what is spoken may have only been thought: Coplin’s is a quiet world, a landscape of resignation, of feelings expressed through bartered gazes rather than words. The pioneer hardness of Coplin’s characters emerges in their silences. When they speak, one feels that most of their utterances come through teeth gritted with the determination of the American West. They have lived through loss, violation, the relentless toil of farming; they are the hardest of the hardened.

In the world of The Orchardist, family roles become confused; Talmadge and Caroline Middey raise Angeline, Jane’s daughter. Talmadge is in his fifties, old enough to be a father figure to Jane and Della, and Caroline Middey could fall easily into a maternal role, but their relationships to each other—theirs is not a marriage of any kind—and the girls are strange even when loving; detached even when caring, only occasionally parental.

The ranging farmland, the great wide sky create a strangely claustrophobic atmosphere. This is a place without distractions, though Talmadge, Della, and Middey could do with some distractions. They tend to the orchard and their wounds. Under Talmadge’s quiet tutelage, they ready the trees for the changes of seasons. They take care of each other in small, invisible ways, allowing each other the dignity of privacy. (The novel concerns itself a lot with what we call “personal space.”)

Clee visits the farm often with his men, and Della insists that he teach her to ride. She becomes an excellent horsewoman and eventually leaves the farm, riding off with Clee’s itinerant workers.

A recurring theme is Talmadge’s struggles with the women in his life. Private and independent, he admires their independence and need for privacy. He worries though that he is shirking his responsibility to protect them, leaving them susceptible to the dangers they have already had to contend with. His fears are realized in unexpected and cruel ways when Della, pursuing Michaelson, ends up in jail. Talmadge goes in search of her, unsure if he should, if his search isn’t a violation of Della’s privacy. He finds himself aboard a train which, he realizes, represents the end of the frontier isolation that has defined his life. Della is no longer a child, of course, and Talmadge understands that she may not want to be found.

As a writer, Coplin’s strengths are her love of language and the originality of her story. This isn’t a plot you’re likely to run across in another book. Her descriptions capture the beauty of the Pacific Northwest at the turn of the twentieth century. Coplin’s characters, on the other hand, are so tough that I wished for more insight into how they feel. The emotion that pervades the novel from the beginning is loneliness. The intimacy grows throughout the novel, but not greatly. We experience this world at arm’s distance.

Annapurna Potluri grew up in Portland, Oregon. Her first novel, The Grammarian, will be published by Counterpoint Press in February, 2013.