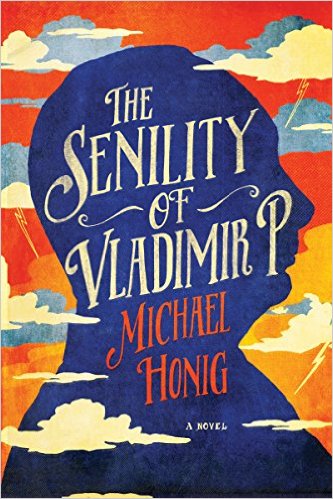 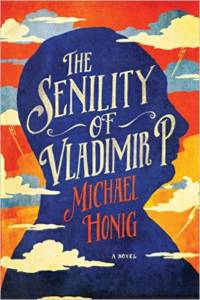 Nikolai Sheremetev, the protagonist of British novelist’s Michael Honig’s second book, is a Moscow nurse. For six years, he’s been looking after a private patient suffering from dementia. The patient’s condition is deteriorating. Prior to his illness, Vladimir P. had been a president of Russia. After his confusion grew and he could no longer hold his own in public, he was quietly replaced by a member of his team and sent into retirement to a private estate near Moscow. As Vladimir’s mental acuity deteriorated, Sheremetev became the single point of contact between him and the outside world. Sheremetev manages his daily schedule, his medications, his rare outings.

Opening with this provocative premise, Honig weaves a tale that convincingly illustrates how systemic corruption of post-Soviet Russia reproduces itself in all strata of society, from the top down. The main plot of the novel follows Sheremetev’s point of view and begins when Sheremetev’s nephew Pasha finds himself in jail for writing a blog post, speaking his mind about the legacy that Vladimir’s presidency had saddled Russia with. Pasha writes,

There was time, there was opportunity, there was a great will for a better society rising out of the people when Boris Nikolayevich handed Russia to him on a plate, and Vladimir could have done wonders. He could have given us the rule of law—impartially applied to everyone, no matter how great or how small.…

Instead, what did we get?…

Pasha’s jailers soon find out the identity of his uncle’s employer and demand of Pasha’s family an exorbitant amount of money for the promise to drop the charges against the young man. The responsibility to come up with the money falls on Sheremetev.

Sheremetev is a man of few needs and few desires. Never in his life had he felt compelled to take a bribe or steal, not even when his wife Karinka was dying of cancer and could’ve used higher quality treatment and medications. Sheremetev had done his personal best, caring for her to her final day, but hadn’t used his position as a nurse to overcharge and collect tips from his patients—a common source of extra income for so many of his colleagues. Pasha had been impressed by his uncle’s ethics, but Sheremetev’s son’s Vasya blamed his father for being a coward, afraid of doing something that could potentially get him into trouble with authorities, and also for cruelly sacrificing his own family and allowing Karinka to needlessly suffer. Since Karinka’s death, Vasya went into businesses for himself. He’s now in the job of “helping people.” Sheremetev prefers not to ask too many questions, but we get a sense that he suspects his son Vasya of living a near-criminal life. Vasya, who does not divulge his net worth, refuses to help his cousin Pasha get out of jail. He believes Pasha’s whistleblowing to be a self-serving enterprise and idiotic at that. “What Pasha writes makes not a speck of difference,” Vasya contends. Pasha does it because “he thinks somehow it makes him better than everyone else.”

Sheremetev must provide the money, or else his nephew’s life is at stake. His jailers are expecting a large pay-day, and should they be disappointed in their expectations, the retribution is likely to be swift. The scheme Sheremetev comes up with involves selling several pieces from Vladimir’s massive collection of rare watches. In theory, the market price of one of these watches alone could pay for his nephew’s release. The watch dealer he finds, a young woman named Anna Ivanovna—an allusion, perhaps, to Alyona Ivanovna, the pawn-broker murdered by Raskolnikov in Dostoyevsky’s Crime and Punishment—is shrewd and capable, and guided only by her own desire for profit. Her people trace Sheremetev back to the dacha, where they rob him and his employer, leaving nothing behind.

One of Anna Ivanovna’s henchmen is Sheremetev’s son, Vasya. In the scene of showdown between father and son, the author allows us only the briefest moment of hesitation about whose side Vasya will choose. Betrayed and hurt, Sheremetev loses all shreds of professionalism. He lashes out at the person closes to him, at the man, for whom he had tirelessly cared for six years: Vladimir. In a moment of panic, he gives Vladimir a massive dose of tranquilizer, prescribed to calm him down. The author gives us to understand that Sheremetev commits a crime not only against Vladimir but also against his own psyche, his identity as a caretaker.

The book jacket describes Michael Honig as a “former doctor.” This is helpful information. Honig has given Russia a straightforward and devastating diagnosis: cruelty. Overwhelming and all-encompassing cruelty that breeds violence, applied precisely to crush the smallest sprout of kindness and hope. He filters this diagnosis through Vladimir’s consciousness. Dementia has robbed Vladaimir of most of his mental faculties, leaving him with a few grains of knowledge that form the core of his being. This is what it comes down to,

Somewhere in the depths of what was left of his mind, he still knew that power is power, and there is no greater manifestation of it than the ability to thwart the will of another person, no matter how slight the occasion or how trivial the apparent consequence—even if it is only refusing to utter a sentence that would cost nothing to yourself.

Nursing as a profession built on caring for others is a non-sequitur in post-Vladimir Russia. Sheremetev must get on with the program or disappear.

The conclusion of the novel is grim, and yet as with so many works of literature set on Russian soil, this book’s meaning lies beyond what is directly on the page. My curiosity was piqued by the name “Sheremetev”—a name that belongs to old Russian aristocracy. There’s a lovely legend attached to the name Nikolai Sheremetev—a nobleman and courtier who lived in the second half of the 18th century. That Nikolai Sheremetev fell in love with Praskovia Zhemchugova, his serf and an actress of the theater he owned. He secretly married her. A few years later, Praskovia died of consumption, and on her deathbed asked Sheremetev to care for the poor. Nikolai dedicated himself to the task. He built the first large-scale hospital for the poor in Moscow. He also petitioned the tsar to recognize his and Praskovia’s only son as his rightful heir. The Sheremetev family carried on Praskovia’s and Nikolai’s legacy. They continued to sponsor the hospital, along with a range of charitable and arts organizations, until the Soviet era. The old hospital survives (albeit under a different name) as the top teaching and research medical institution in Moscow.

Throwing this legend into the mix doesn’t alter the diagnosis, but perhaps points to the cure. Sheremetevs—the fictional character and the historical figure– alone cannot change the system, but their very existence disrupts the culture of violence. Grieving for them is an act of resistance and hope. Vladimir is beyond remedy, but maybe Russia won’t be if there are enough Sheremetevs left.