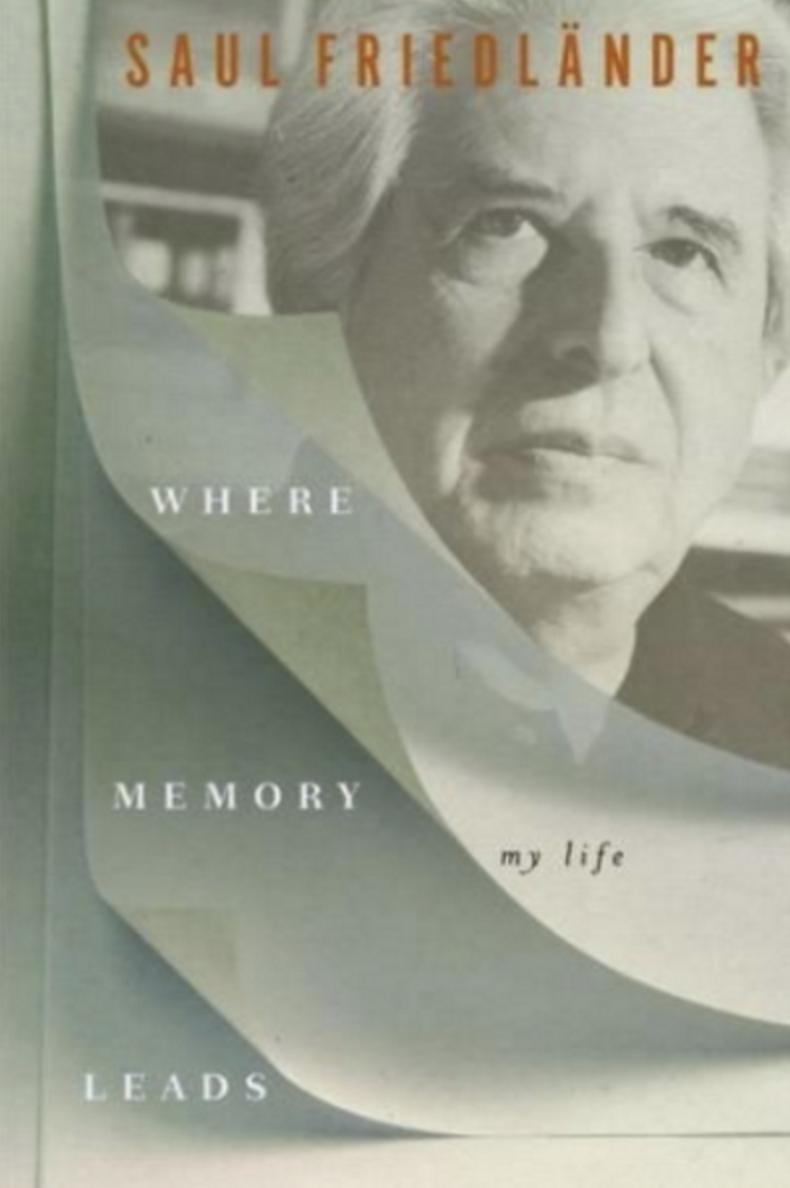 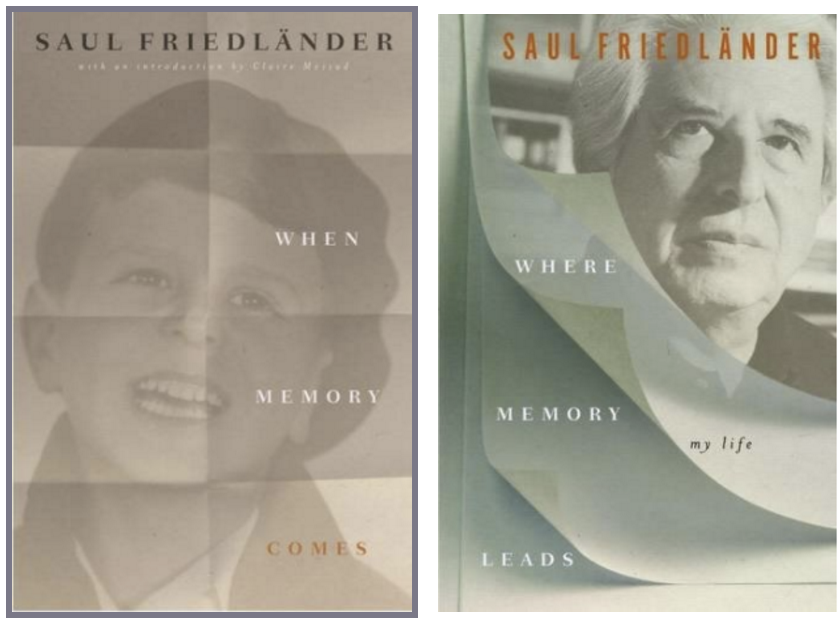 Memory is non-linear. As is memoir, more often than not. Personal history may take us on a leisurely, even meandering journey, but at its most powerful, it can drive home complex truths about our world and ourselves more forcefully than narratives (history or fiction) that have more distinct plot points.

Saul Friedländer’s dual memoirs released by Other Press, When Memory Comes(reissued) and Where Memory Leads (new) offer respectively a linear, historical and a more contemplative, impressionistic look at the impact of the Holocaust over the eight decades of his life.

Friedländer, a Holocaust survivor and historian whose book The Years of Extermination: Nazi Germany and the Jews earned him a 2008 Pulitzer for general nonfiction, penned his first memoir in 1977 in French while living in Israel. Titled from a line in Gustav Meyrink’s 1914 novel The Golem, When Memory Comescontemplates a childhood that, by Friedländer’s own account, rendered him speechless for many years:
“It took me a long, long time to find the way back to my own past,” he writes. “I could not banish the memory of events themselves, but if I tried to speak of them or pick up a pen to describe them, I immediately found myself in the grip of a strange paralysis.”

He goes on to note that “since I could not forget the facts, I made up my mind to view everything with indifference: every sort of resonance within me was stifled.” That coping  strategy clearly informs the narrative tone of both books: matter-of-fact and distant even in moments of intense emotion.
Distance works to very different effect in each book. In When Memory Comes, that hawk’s eye remove casts the scope and horror of the author’s memories in stark relief. The son of German-speaking Jews, Pavel (subsequently Paul, then Paul-Henri, then Shaul, and finally Saul, each name representing a new leg of his journey) was born in Prague four months before Hitler came to power. In his family, “Judaism as a religion had completely disappeared”—so completely that as a child he only learned he was Jewish on being expelled from catechism study in his classroom and sent to study with a rabbi. His affluent and cosmopolitan parents saw no reason to leave Czechoslovakia until it was almost too late.

They relocated to Paris, retreating into the countryside as France became increasingly dangerous for Jews.  After a miserable stint in a Jewish orphanage (where he was beaten by other orphans for being too goyishe), the author was moved to a Catholic boarding school in Montluçon, which his parents presciently deemed safer than a Jewish institution. Baptized with their permission, he remained in hiding for four years. His parents never found asylum. After a failed attempt to cross the border into Switzerland, they were deported to Auschwitz and murdered. Friedländer’s reflections on this period are the most powerful passages of both work, and his evocations of place can be transporting. He portrays one night where he and other children at the Jewish home were hidden overnight in a forest near La Souterraine, a town in the center of France, to avoid deportation:

We left by twos. The march took place without mishap; I heard no sound save the crunching of pebbles and the occasional snifflings of my little comrade…I didn’t sleep. I had no feeling of danger, quite the contrary: the warm breeze, the rustling of the trees, the wispy clouds that from time to time drifted across the stars filled me with a sense of well-being.

Shortly after this incident, Friedländer’s parents decided to move him to the Catholic institution, where, he recalls,

Everything…. stifled me: the austere discipline, the continual prayers of which I didn’t understand a word, the dreariness of our dark building, and, finally, the food which seemed revolting to me. I don’t know why, but I imagined that the rubbery meat that was served us on the day after my arrival was cat meat.

Particularly heart-rending is a scene in which he describes running away from the school to find the hospital where his father was being treated for ulcers. He was quickly sent back, but not before recognizing the severity of the situation when his exceptionally reserved father kissed him for the first and last time.
Even more haunting are the increasingly desperate letters his parents wrote to the headmistress of the seminary during their panicked final days. Denied immigration visas to other countries, they found solace “for the moment at least, in saving our boy,” wrote his mother in one. “We can no longer exist legally… I beg you to excuse the appearance of this letter. My hands no longer obey me.” Their final correspondence, thrown from the train to Germany and passed to the seminary by Quakers, contained 6,000 francs, a charm bracelet, and the invocation, “May God repay you and bless you and your whole family.”

“What God was meant?” Friedländer muses.

Ignorant of his parents’ fate at first, Friedländer set his sights on Catholic priesthood, and upon sharing this goal with a mentor, he learned the truth. Standing before a painting of Christ on the cross, the priest told him of “the trains, the gas chambers, the crematory ovens, the millions of dead.” The revelation had profound implications for Friedländer personally and professionally: “For the first time I felt myself to be Jewish—no longer despite myself or secretly, but through a sensation of absolute loyalty.” He left Church for the right-wing Zionist youth group Betar, eventually setting sail for his new life in Israel. From that setting, in the lengthening shadow of the 1973 Yom Kippur War, he finally was able to confront his past and commit it to paper.

When Memory Comes was lauded on first publication for the sparse elegance of its prose and unflinching depiction of the unthinkable and duly ushered into the canon of Holocaust literature. Written some thirty years later, Where Memory Leads, as the verb in the title suggests, is a very different kind of book. If the first Memory is a meditation on childhood events, the second is in large part a meditation on remembering itself—something that Friedländer, now in his eighties, admits to struggling with increasingly:

Over the past few months I have noticed that the disappearance of words and mainly names of people I know well is worsening. How come, however, that these words and names reappear, sometimes days later, after a relentless quest or just so, on their own?

Significantly longer than its precursor, Where Memory Leads picks up where When Memory Comes leaves off, using the traumatic experiences of the former as a kind of lens through which to consider his later years in Jerusalem, Tel Aviv, Geneva, and Los Angeles. In this volume, we are left with a stronger awareness of his detachment. While much of the narrative traces Friedländer’s academic and political evolution, these threads are also interwoven with his musings on the capricious nature of recollection. At points, he seems to be writing mainly to put everything down before he forgets (“I realize I have said very little about the music I love,” he frets on the book’s penultimate page). And though this makes Where Memory Leads less taut and emotionally resonant than its predecessor, it also rounds out and gives texture to some of the latter’s observations. Among the more interesting examples are Friedländer’s explorations of the fallout from his childhood ordeal, which the first volume leaves mostly untouched. As he notes, “[w]e Jews erect walls around our most harrowing memories, and our most anxious thoughts of the future. Even a story complete to the last detail sometimes turns into an exercise in hiding things from ourselves.”

In Where Memory Leads, we learn that he has struggled against agoraphobia, claustrophobia, a profound fear of flying, and myriad psychosomatic ailments that “no physician, psychiatrist or analyst seemed capable of curing.” Friedländer experiences bleeding ulcers, the same ailment that put his father in the hospital in France. He tries psychotherapy (at one point almost daily), and one of his therapists not only recommends institutionalization but urges his wife, Hagith, to move out. Friedländer also discloses an addiction to tranquilizers, drinking himself “senseless” on international flights and all the medications he has tried, which have affected his memory and other bodily functions.

The remove with which Friedländer recounts these later struggles is perhaps surprising, considering that these after-effects are many decades more recent than the trauma itself. But one suspects that it’s this distancingthat has allowed him to examine a phenomenon as personally fraught as the Holocaust as a historian. He discusses the evolution of his work as historian and scholar, as well as various conflicts and concerns over the representation of Holocaust history both in and outside the academic world in the same dispassionate way. In the 1970’s, for instance, he cites “a strange sort of countermemory of the Third Reich” found in films like Hans-Jergen’s Syberber’s Hitler, ein Film aus Deutschland and Liliana Cavani’sThe Night Porter,which consciously glamorize and even fetishize Holocaust history. Friedländer sees in these:

the very use of some of the components that so effectively ensured Nazism’s hold on millions of Germans and other Europeans: syrupy sentimentality (kitsch) mixed with the exaltation triggered by total destruction and mass death.

He relates having had the opportunity to confront Syberberg directly with this observation at a dinner party. It is one the latter clearly doesn’t share, given the breathtaking anti-Semitism of his retort: “What I am presenting is art, while the Jews are making money with Auschwitz!” As Friedländer wryly notes, the filmmaker was likely alluding to the pivotal (if artistically dubious) NBC miniseries Holocaust. But, he observes, “‘the Jews are making money’ rang a familiar bell.”

The author recounts another academic debate with similar (if subtler) anti-Semitic underpinnings in his discussion of the Historikerstreit (commonly translated as “Historians’ Dispute”) of the 1980’s, which pitted right- and left-scholars against one another on the historical framing of the Holocaust. Friedländer’s detachment renders these already-esoteric arguments about ‘functionalism’ (the view that the Holocaust evolved gradually and somewhat haphazardly into mass genocide) and ‘intentionalism’ (that it was the result of a deliberate and intentional ‘master plan’ from the beginning) that much harder to follow. This is a shame, since so much of what Where Memory Leads has to offer is its author’s immensely nuanced understanding of not just the history of the Holocaust but the lessons to be learned from it. They are lessons that, especially at this moment, seem all the more essential to heed.

However, any literary dissonance between the two volumes is outweighed by the strength and depth of their combined narrative. Taken together, When Memory Comesand Where Memory Leads form a powerful testament to the Holocaust’s reality and its legacy, one that is at once scholarly and profoundly personal. They also offer a thought-provoking study of the psychological impact of trauma; the ways in which we alternately hide and seek the truth, and the incremental and often painful path to acceptance, and perhaps even peace.

Jennifer Cody Epstein is the author of the historical novels The Gods of Heavenly Punishment and The Painter From Shanghai. An adjunct professor at Columbia University’s MFA Writing Program, she is currently working on a novel set in 1930’s Berlin.

Curated by SARAH WHELAN
The Common is gearing up for LitFest, a weekend of events to celebrate contemporary literature, with extraordinary voices such as Jesmyn Ward, Susan Choi, Laila Lalami, and Ben Rhodes. Read on for our editors' recommendations from some of the participating authors.

JEN HINST-WHITE
“There has to be more to this other woman than her role as a mother,” she said. I realize now that she was speaking from her own recent, still-raw experiences.

Curated by SARAH WHELAN
This month, we're sharing the audiobooks that have entertained and challenged us this year. If you’d like even more listening material, check out The Common Online’s Poetry Recordings here.