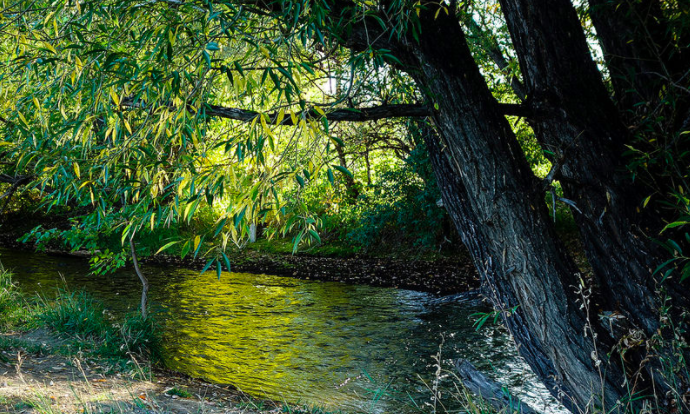 South of Hugo, Colorado on Highway 287, the land is wiped clean, the prairie grasses and flowers of spring cut to the root by cattle, their shining white teeth. Dung, dark stains on the land running the fencelines, remnants of progress, the way we produce meat in this country. It cannot have rained in many days. These hard-pan flats, the leading edge of the Great Plains east off the Rockies, turn a dust devil against the horizon to the south.

Your road leads on to Kit Carson, then Eads, and Chivington, little more than a collection of abandoned houses and farms. To come into this place is to imagine better times. From here, it’s about eight miles of dirt road: Chief White Antelope Way.

Stand here, traveler. You have come a long way. Beyond this fence, something happened.

In the winter of 1864, at this bend in Sand Creek shaded by cottonwoods, an encampment of 700 Cheyenne and Arapaho people—the people of Black Kettle, War Bonnet, White Antelope, and Left Hand—were attacked by Col. John Milton Chivington and his 3rd Colorado Volunteers. The people had been given assurances of peace and protection by the Army. But back in Denver, Chivington boasted of taking scalps and “wading in gore.” (Perhaps you thought McCarthy’s Blood Meridian was a fiction?) The people thought they heard bison, that deep drumming in the Earth that meant this winter they would be all right. As the 3rd came in hard on their horses, their guns booming and smoking, the people came apart.

The young men were out hunting, so most of the 200 murdered were children, their mothers, their grandparents. Among them, White Antelope, an old man now, who came out to meet the soldiers. “Stop! Stop!” he shouted in perfect English. The soldiers took scalps and cut away the genitals from the dead, hung them from their saddle horns, showed them off in Denver.

Standing here in spring light, a little wind from the northwest, a sweep of high, thin cloud, it is possible to feel hopeful, to feel at peace. The new leaves of spring will soon spread across the trees to the sun. You listen. A meadowlark calls. You listen again. Perhaps this is the same soundless presence that came in after the guns, when the survivors walked among the ruins. We have all been walking among the ruins ever since.

N. Scott Momaday has written that sacred places are “where words and place come together,” and that to “encounter the sacred is to be alive at the deepest center of human existence. Sacred places,” he writes, “are the truest definitions of the earth; they stand for the earth immediately and forever.”

Having come here, you know this is so. You have to travel a long way out from the center to find this. This is why you have walked the ground at Sand Creek, and listened for the gravesongs of the dead and the still dying.
Kurt Caswell is the author or two books of nonfiction: In the Sun’s House: My Year Teaching on the Navajo Reservation, and An Inside Passage, for which he won the 2008 River Teeth Literary Nonfiction Book Prize. He teaches creative writing and literature in the Honors College at Texas Tech University.