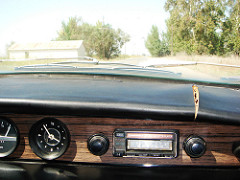 Translated by JACQUELYN POPE
In love everything is possible. You doggedly
paper a tree with roses
and say: this was the place
and everyone who passes should
know it. Or someone decides: this deadweight
can’t be lifted any longer, I’ll set it
like stone at the foot of the cliff, but
it doesn’t make walking or breathing
any easier. The asphalt that bridges the river
points up high, the radio
sings Ach and Oh and on the truck
in front of me, shamelessly written
in the day’s filth, it says Now that you’re no longer here
you’re closer than ever before. Exactly so. Who
had the guts, with a single finger in dust, to clear
the way for the most faithful? Soon
the bridge will open, the row will set forth
in obedient motion and I’ll pass
the purified sludge of Zijnstra Inc.
and a declaration of love written in mud.

Hester Knibbe was born in 1946 in Harderwijk, The Netherlands. Her poems have been widely published and have received numerous national awards, including the A. Roland Holst prize in 2009. Her most recent books are Oogesteen, a selection of her work from 1982-2008, and Het hebben van schaduw, both published by De Arbeiderspers, Amsterdam.

Jacquelyn Pope is the author of Watermark. Hungerpots, her translations of the Dutch poet Hester Knibbe, is forthcoming. She is the recipient of a 2015 NEA Translation Fellowship, a PEN/Heim Translation Fund grant, and awards from the Academy of American Poets and the Massachusetts Cultural Council.