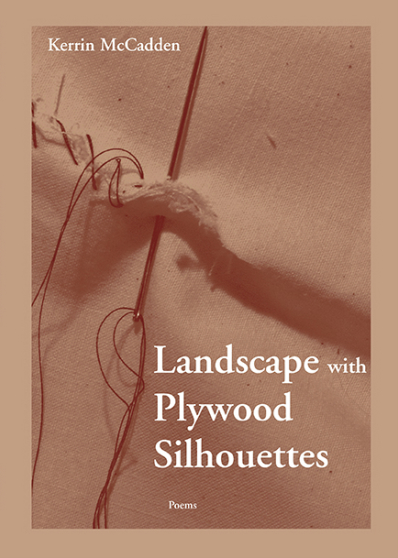 Kerrin McCadden’s poignant debut collection of poetry, Landscape with Plywood Silhouettes, is filled with composed wisdom for how to cope with separation in general, and divorce in particular. The collection won the New Issues Poetry Prize in 2014, and McCadden’s poetry has appeared widely in Best American Poetry 2012,American Poetry Review, Poet Lore, and elsewhere.

In the opening poem, “Becca,” a teenage girl asks the speaker what tattoo to get on her back. “What’s your favorite font? What should I / have him write?” “Serifs,” the speaker answers, “I like serifs.” The speaker, maybe a teacher (not Becca’s mother, who “weeps” at the tattoo), accepts that all of Becca’s choices, including the bad ones, are hers alone to make. Becca decides her tattoo will say: “Make of my life a few wild stanzas,” inspired by Mary Oliver’s “A Dream of Trees.” As Becca “lies / on the bed while the artist marks her back,” McCadden turns these words into a sort of blessing for the opposite of “wildness,” which is constancy, stability. “Make of / my life a place to stand, stopping-places, a series / of rooms, stances, stare, stantia, stay.” McCadden aptly conveys that freedom can be welcome, yet fraught. Hence, the desire for a “stopping-place,” a refuge for her and Becca both. But Becca, a teenager who has not experienced loss the way the speaker has, still wants “wild stanzas.” She disregards the speaker’s call at the end of the poem to “stay”: “I watch her strike out across / Number 10 Pond, the tattoo flashing with each stroke, / and there is barely enough time to read it.”

McCadden weaves references to a lost marriage throughout the collection, and the same speaker seems to be negotiating this painful parting in all the poems. “I always wanted / a long marriage,” she writes in “Bone China.” “Divorce” comes up early in “The Death of the Reader.” A divorce has clearly eroded the speaker’s sense of identity, and she is unsure about her post-separation self. A symbol of this loss is the speaker’s changed relationship to books, “I have not read a book since my divorce, or, / I have been a bad reader and have read / books, but have not finished them…” This poem alludes to Roland Barthes’ essay “The Death of the Author,” where Barthes theorizes that authors “die” once they release their texts into the world. McCadden writes of symbolically “dying” after a relationship. She is no longer able to read beloved novels, “those books that are to lose oneself inside.” What the speaker canread (and fortunately write) is poetry. A poem “can break / your heart in the short term, and over and over.” Poems rescue McCadden, enabling her to grieve in brief, intensive bursts. “This is the heartbreak I am after. Not the one / after the marriage, the long marriage, the forty / open acres of marriage, the fifty page ending.” The separation in Landscape is a drawn-out dénouement. Appropriately, after “The Death of the Reader” comes “How to Miss a Man”: “Also, breathe. It is a rhythm.”

McCadden often expresses longing as disorientation. Throughout the collection, things fall apart, dissolve, and float, including houses. In “Elegy for Some Beach Houses,”

The break off Chatham broke and spilled
old homes into the sea, just spilled them
like dresser drawers pulled out too far,
quiet underthings sent flailing like old aunts
into the surf

Little is secure. In “Safety Instructions,” “You are suspended above the world, / a careening impossibility. You are flying, headlong.”

The book portrays the experience of estrangement wonderfully. In “Ways to Say Goodbye,” McCadden writes,

each night, you send an email to yourself, and to ten
strangers, filing a report on your findings, and your
leavings, so that someone will know where you’ve been,
and how desperately, like a child, you love the world.

The “ten strangers” refers to a group called “The Grind,” writers who, for one month at a time, commit to sending each other drafts of their writing by email.

McCadden also expresses longing for a life that took a different course than the one she strived for. In the title poem, “Landscape with Plywood Silhouettes,” a couple tries in vain to bridge the distance that has wedged between them,

They dream and dream, notwithstanding
the way the layers of plywood have gapped in the weather
over the years since they began trying to bridge the void
inside their outlines, which is all we were ever able to do.

In these lines, the third person “they” becomes the first person “we.” The couple, which now includes the speaker herself, cannot mend the distance, only “dream” of it.

The collection demonstrates McCadden’s mastery of the prose poem. The poems are substantial without being weighty. Her work evokes Brigit Peegan Kelly, Claudia Emerson, and Elizabeth Bishop. Each of the poems—“rooms,” “stances,” or stanzas mentioned in “Becca”—is like a protective shelter McCadden has built for herself. She also has a fierce talent for musicality, as in “Love Poem Not for a Husband,” “Some days I am a mouth on a fish swimming / and swallowing the stream of things in front of me.”

Landscape with Plywood Silhouettes offers other intriguing motifs and subjects: a poem addressed to a month; goats and butterflies; a woman who turns into a piece of furniture; Laika; Tom and Jerry; America. In “Mostly, She Practices Falling,” McCadden reflects on a woman she hears on the radio, who takes drastic measures to feel “intense physical sensation.”

I am in my car, and the woman on the radio

talks about wanting to feel the most

intense physical sensation she can.

Instead of dancing, she practices falling.

She wants to make moves she can’t help

but complete – mostly, she practices falling.

How far can she fall and not get hurt?

This question—presumably about the woman on the radio (“she”)—is also self-reflexive: how far can “I” fall? When reading Landscape with Plywood Silhouettes, we become confident that the speaker of the poems will survive, and thrive, because in spite of her loss, “practice” implies control. When we have battled to overcome pain and separation, falling (failing) is less of a risk. McCadden suggests that by throwing ourselves down again and again, we might just be healed.