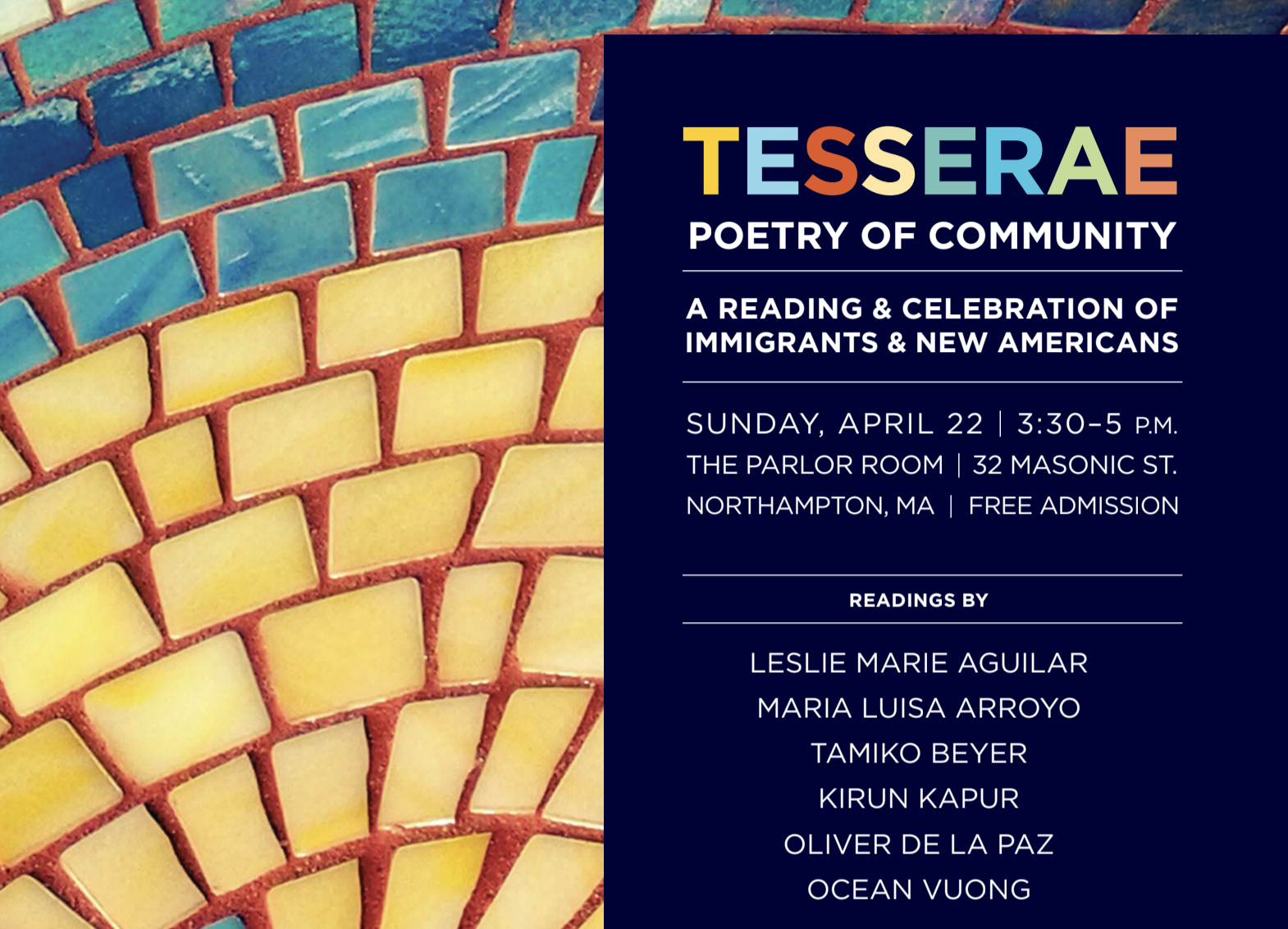 The Common brings you a special two-part series as a preview to Tesserae: Poetry of Community – A Reading & Celebration of Immigrants & New Americans, coming up on Sunday, April 22 3:30–5pm at The Parlor Room in Northampton, MA; free admission. You can view Part One of the series here. 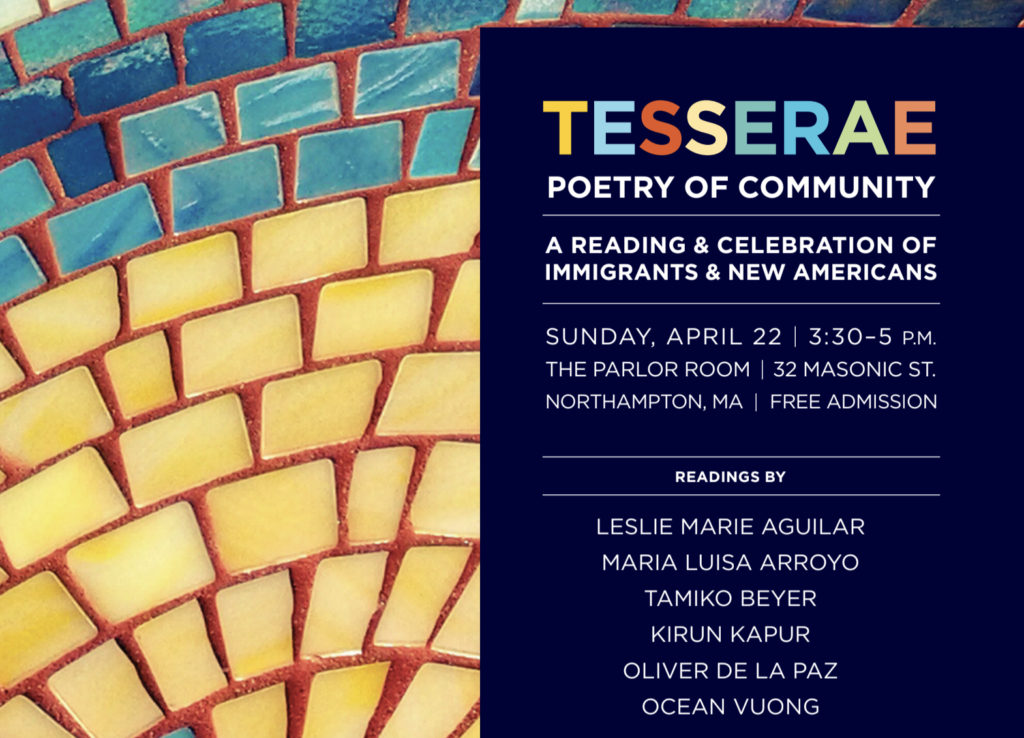 After many sleight-of-hand days the sun squares itself on the white walls. Tart is what my tongue says against the slice I lay across it. Sweet say my molars. This apple grown from graft. Open the myth starred in every core – shiny useless things.

Our stem tale sutured.
Where my mouth would be, my beak
creaks open. Astounds.

We steer the car straight to the horizon
where, behind the blue, stars shine steady

progression—icecaps drifting
from out of the blue to where the hell.

to squint. The rich nestle in their linens.
The rest of us scratch out syllabic

posts, our rheumy screens laden with gaping
desire. Were we quite invited to this party

on earth? What kind of lousy guests
are we—shipwrecked wanderers splattering

gore wherever we go? What warps and tears
in what geologic story brought us to bear?

My bones are fossil—have been.

each intersection’s a four-way stop,
and traffic’s backed up for miles. Is a graceful

exit still possible? A gentle goodnight
before another pileup, another grisly

crash site? My bones are fuel rods, cracking
at the curb, endlessly in need of a cooling pool.

The car stalls. We look under
the hood, read the oil stains. They say–

not for long, humans. Not long for this break
neck break speed world.

Tamiko Beyer is the author of We Come Elemental (Alice James Books), and the chapbooks Dovetail, co-authored with Kimiko Hahn (Slapering Hol Press) and bough breaks (Meritage Press). Her work has been published or is forthcoming in Black Warrior Review, Denver Quarterly, The Volta, and elsewhere. She is a Kundiman fellow and serves on the board of the New York Writers Coalition. A social justice communications writer and strategist, she spends her days writing truth to power. She live in Dorchester, MA and online at tamikobeyer.com.

Half past eleven & the desert shoulders a sequence of stars for the eighth year in a row. Maia. Electra. Alcyone. Taygete. I call each saddled sister by name. Asterope. Celaeno. Merope. Imagine what it must be like to be illuminated. Stitched into an unraveling tapestry. I wrap my hair in a veil lined with sequins. Head toward a more artificial glow. It’s the night before my wedding. So I conjure for my marriage bed a brand-new constellation. A bit sparse.

But I’ve yet to experience the distance between bodies. Jackals saunter across this sky wearing mountain lion jaws as crowns. Handsome strangers. My sweethearts, perhaps? They offer me a diadem of my own. Motion to an empty plateau. Before I can lie down, I hear distant chants of long-dead relatives. Each calling me by a different name, as I run in the direction of an ever-expanding horizon—violet with rage.

I am a body of light jettisoned through the universe at speeds beyond comprehension—a supernova afraid to be reborn. My illness is invisible this way. A system of shrinking. One day at a time. I signal for help from a deity that does not know my name, only the cadence of sighs. Afraid of failure, I exhale deeply. Travel from one satellite to another looking for a more expedient method of dissipating.

Some days this imagining is enough, but not the day I lose my wallet in a Wal-Mart parking lot, or the day I spend my life savings on an accent chair. How many times can I repeat, everything will be okay, & hope for a miracle in a moving van? It’s selfish to be this unhappy, I think. But I can’t imagine a better way of collapsing, except slowly, & then all at once

Radioactive dust coils around my spine. Nerve endings become wicks. Set on fire. I am made fluorescent. Maybe, if I were, this illness would glow. Show some signal of distress. But I am out of range. Tethered to a god with no name I am ready to say out loud. This is what it means to believe in a phantom without naming it.

Leslie Marie Aguilar originally hails from the heartland of Texas. She received her MFA from Indiana University, where she served as the Poetry Editor of Indiana Review. Her work has been supported by the National Society of Arts and Letters and the Fine Arts Work Center. Her poems have appeared or are forthcoming in Callaloo, Hobart, Ninth Letter, Rattle, Sonora Review, and Washington Square Review among others. She is the author of Mesquite Manual (New Delta Review, 2015), and currently works as the Editorial Assistant for Meridians: feminism, race, transnationalism, at Smith College.

The boy in the labyrinth leans into the dark’s sweet kiss. Cave-ins from somewhere in the tunnels send gusts of wind into the boy’s face. The boy imagines a wheel spins in his brain that makes the cavern shake. The rhythm of it turns in the spirals of the boy’s ear. Sound made thicker in the dark. Sound, absolute—and pitch heightened by the boy’s hunger. The fury of his mind honed from the underground, he thinks he hears wind through the pinnate wings of gulls far above the tunnels. Imagines a cart above, heavy with fruit for the afternoon bazaars. His dreams his teeth piercing a plucked grape’s skin. Incisors splitting in half, the soft brown seed. His mind stretches beyond its elastic point. Bends to what the dark gives.

The boy in the labyrinth bends to the darkness. Closes his eyes. Imagines that it lies to him. Because it is full of lies. Because at the center of the darkness is a man who is also a bull. And he is curled up at the hub of it all. The boy thinks about the man-bull padding his way along the slick corridors, rubbing his sides against the hewn edges of basalt. Here and there a tuft of fur snags, yanked out in patches. The minotaur nudges along the way the sightless fishes swim up with the waters of the underworld, pulled by the current, the waters sucked their mouths and on through their gills. To the fish, it’s as if the current were a thing with a mind. It enters the mouth and leaves it according to its will. And in the labyrinth the will is forever wishing to be let in.

Originally published in The Common Issue 06.

Oliver de la Paz is the author of three collections of poetry, Names Above Houses, Furious Lullaby (SIU Press 2001, 2007), and Requiem for the Orchard (U. of Akron Press 2010), winner of the Akron Prize for poetry chosen by Martìn Espada.