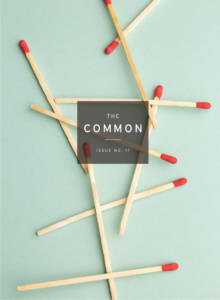 Supplementary materials for teaching Issue 17 are listed below.

Browse an interactive map of Issue 17

To accompany the portfolio of Syrian stories

In “Translation as Art: Against Flattening,” Hisham Bustani, The Common‘s Arabic Fiction Editor, discusses the richness of contemporary Arabic literature, countering the stereotypes of “east” and “west,” and contributing to “the ongoing discourse of translation as a ‘bridge between cultures’ and a means for mutual understanding.” (translated by Robin Moger).

Silence in the Syrian Limbo: an interview with Odai Al Zoubi in The Common Online; see also: A message to the west: what can ‘they’ learn from ‘us’? (via Open Democracy); and The Legend of the Flood: The Beginning and End of the Revolution (via Al-Jumhuriya English).

Luqman Derki’s poem, “Blackness” is featured at Words Without Borders; read about Bayt al-Qasid (House of Poetry), a poetry series Derki hosted in Syria (via The New York Times).

Ibrahim Samuel on writing as a political art, his influences, process, and the work of leaving stories open-ended (via Abwab).

Read an excerpt from Haidar Haidar’s novel A Banquet for Seaweed (via The International Literary Quarterly); the book was first published in Arabic in 1983 and sparked controversy and protests in Cairo when it was reissued in 2000 (learn more via Aarab Lit and New York Review of Books).

Translator Robin Moger on translation “prize culture” and how it impacts the Arabic literature available to English-language readers (via The National).

Translator Alice Guthrie provides a linguistic breakdown of the term “Daesh” and explores anglophone media’s resistance to the term (via Films for Action). Over at ALTA’s blog, learn about Guthrie’s path to becoming a translator, including what drew her to the Arabic language, and visit English PEN to read about Guthrie’s work on the anthology Syria Speaks.

Read a brief interview with Master calligrapher Mouneer Al Shaarani (via The National) and view more of Al Shaarani’s work (via Mashable).

Soulaf Abas speaks with WTIU News in Indiana about losing “home” and using her own artwork to address that loss, and discusses how art therapy has helped Syrian children in refugee camps; learn more about Abas’s work (via The McKendree Review).

Abd al-Rahman Munif profiles the life and work of artist Fateh Al Moudarres, whom he recalls as “one of the main witnesses of the present Arab age” (via AL JADID).

Explore the current exhibitions at Hindiyeh Museum of Art, located in Balqa, Jordan.

Jonathan Wright on the journalist as literary translator; plus, check out Wright’s 10 rules for translating (via Arab Lit).

Alice Guthrie discusses bringing Arabic literature to a broader readership, including a forthcoming anthology of queer Arabic writing, and the challenges of translating the vernacular (via Massachusetts Review Online).

Translator and author Ilan Stavans speaks about The Wall, his poetry collection based on his experience walking the border between México and the United States, with poems written in English, Spanish and Spanglish (via NEPR). Find more from Stavans in our pages; for further exploration, read Stavans take on language, translation, and the World Cup (via Chronicle of Higher Education).

Angela Quian explores what it means to belong or to be “foreign” as a first-generation Asian American living in Japan and in the U.S. (via The Toast).

Ghassan Zeineddine speaks with Robyn-Phalen Rayson about living in Lebanon and the role of comedy, folklore, grief and politics in the crafting of a narrative (via Kenyon Review podcast).

Aatish Taseer discusses the impact of caste in today’s India as explored in his new book, The Twice-Born: Life and Death on the Ganges (via PRI.org); read a review of The Twice-Born in Hindustan Times. Taseer writes on the complex history of naming and colonial legacy in India, or Bharat (via The New York Times). For further exploration, see PRI’s “Caste in America” series.

Marietta Pritchard on reading early feminists in the era of #MeToo and the evolution of the women’s movement (via Daily Hampshire Gazette).

Remembering the life and work of Brazilian poet Ferreira Gullar (via Hyperallergic).

A review of Tyree Daye’s book River Hymns (via Pedestal Magazine); Daye is a winner of a 2019 Whiting Award in Poetry.

Jennifer Jean discusses attention to the line in free-verse poetry and offers a classroom exercise to help students explore line breaks and enjambment (via MassPoetry.org). For further exploration, read Jean’s take on persona poems, life experiences, and the line between empathy and appropriation (via Solstice).

Elizabeth Metzger on poetic inspiration, her relationship to writing, and her advice to young writers (via The Adroit Journal); Metzger discusses The Final Voicemails, Max Rivto’s posthumously published collection, as well as her role as Rivto’s friend, reader, and literary executor (via Frontier Poetry).

Bob Hicok on being a “funny” poet, the perceived compartmentalization of contemporary poetry and poets, and the idea of poetry changing the world (via Poetry Daily).

Matt W. Miller on the metaphor of drowning, becoming a poet, and intersections of writing and teaching (via New Hampshire Public Radio).

Steve Kistulentz on the writing process, and how writing books changes it (via In Process); read a review of Kistulentz’s book, Panorama, which tackles instances of trauma and tragedy and the ways in which the media and the private self process these events (via Spine).

Virginia Konchan on the domestic sublime: bilingualism, individuality, marriage, and languages of love (via Anomaly).

Erica Ehrenberg on finding voice, finding ideas, and reading as a writer (via Fordham University).

Richie Hofmann in conversation with Brian Wiora on growing up in Germany, reading in translation, and writing his own poetry (via Columbia Journal).

Benjamin Grossberg on finding inspiration in science fiction and the natural world (via The Massachusetts Review).

Angie Macri writes on passing down a love for writing to her daughter and changing the world through writing (via Superstition Review); read a review of Macri’s collection Underwater Panther, based on her childhood home of Southwestern Illinois, which delves into place, history, and the competing cultures and political and economic forces that give shape to the places we inhabit (via Southern Humanities Review)

Read more from our Issue 17 poets in The Common Online: