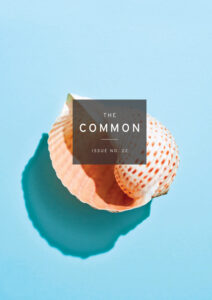 Supplementary materials for teaching Issue 22 are listed below.

To accompany the Portfolio of Writing from the Arabian Gulf

In “Who Writes the Arabian Gulf?” portfolio co-editor Noor Naga discusses the impetus for and development of this rich collection. As Noor describes, the poems, stories, and essays in this portfolio “engage seriously with what it means to be a body uncomfortable in space: to be outside looking into, or inside looking out of, the Arabian Gulf; to be invisible or hyper-visible; to be trapped or forced to move, continuously, like an outlaw. They speak to each other across all kinds of divides.” Listen to The Common‘s podcast to hear Noor discuss her idea to create the portfolio, what she enjoyed about assembling it from submissions, and what themes unite the pieces that became part of it.
Podcast: Mona Kareem on “Mapping Exile: A Writer’s Story of Growing Up Stateless in Post-Gulf War Kuwait.” In this conversation, Mona talks about her family’s experience living in Kuwait as Bidoon, or stateless people, and why examining and writing about that experience is important to her. She also discusses her work as a poet and translator, her thoughts on revision and translation, and why she sometimes has mixed feelings about writing in English.
Podcast: Priyanka Sacheti on “Oman is Mars: An Alien All Along.” In this conversation, Priyanka discusses her essay from the portfolio and talks about her feeling of not belonging anywhere—born in Australia to an Indian family, but growing up in Oman as a third culture kid. She also discusses her work as a poet and an artist, and her experience being stranded between countries during the COVID-19 pandemic.
In addition to Deepak Unnikrishnan’s introduction to the portfolio, students will find much of interest in Unnikrishnan’s essay “Places: A Rumination on Cities,” which discusses code-switching and conflicting identities (via The Margins), and “The Hidden Cost of Migrant Labor,” in which Unnikrishnan explores what it means to be a temporary person in the gulf and how that legacy shapes individual lives and permeates generations (via Foreign Affairs – restricted access).

“What it’s like to grow up as a Third-Culture-Kid in Saudi Arabia” an essay by Victoria Heath featuring fourteen third culture kids (out of thousands) from three different generations in Saudi Arabia: the 1960s-1970s, the 1980s-1990s and the 2000s-2010s (via The Plaid Zebra).

“Cast from the Garden,” an essay by Egyptian writer Youssef Rakha on the hotel apartment and transience in the United Arab Emirates, where he worked briefly (via The National).

“Third Culture and Then Some,” an essay on home and identity by Nada E., an Egyptian writer who was born and raised in Bahrain, studied in the UK and now lives in the United Arab Emirates (via her blog, One Arab Vegan).

Students reading Mona Kareem’s essay, “Mapping Exile,” a reflection on post-war existence, asylum, and memory, may be interested to learn more about the Bidun population of Kuwait and the challenges they face (Minority Rights Group International). In an interview with Words Without Borders, Kareem discusses the rise of Arab feminism and writing by Arab women.

Readers of Keija Parssinen’s essay “It was no Arabian Nights at All” can learn more about the Aramco compound in Saudi Arabia (CNN), and see additional photographs of Dhahran by Pakistani-American photographer Ayesha Malik, who was born and grew up in the camp, where her father worked. (Futureshoot.com).

After reading Danabelle Gutierrez’s poem “Uwi”, read this interview with Gutierrez in ElectraStreet, in which she discusses writing poetry in the UAE, her acting career, and the book-writing process.

For further exploration here and elsewhere

Podcast: Romeo Oriogun on “The Sea Dreams of Us.” In this conversation, Romeo talks about his life as a poet in exile from Nigeria, and how that experience of exile appears in his poetry. He also discusses his writing process, the themes he often returns to in his work, and how growing up in Nigeria affects his use of language in poetry.

Podcast: Shubha Sunder on “A Very Full Day.” In this conversation, Shubha talks about writing stories set in India, and how she built out the insular world of Indian retirees that “A Very Full Day” centers on. She also discusses teaching creative writing to undergrads, her revision process, and her forthcoming collection of stories Boomtown Girl, which won the St. Lawrence Book Award.

Podcast: Tom Sleigh on “Last Cigarette” and “Apology to My Daughter.” In this conversation, Tom talks about his time as a journalist in Syria, Lebanon, Somalia, Kenya, Iraq, and Libya, and how that experience comes out in his poetry. He also discusses the process of putting together his new poetry collection from Graywolf, The King’s Touch, and how he sees the current Ukrainian refugee crisis playing out differently than crises in other parts of the world with less established infrastructure.

Podcast: Julia Cooke on “Past and Future on Rapa Nui.” Julia talks about her trip to Rapa Nui, commonly known as Easter Island, a place famous for the mysterious moai statues that dot the remote landscape. She also discusses the island’s complicated and unknowable history, her earlier work as a journalist, and her latest book, which chronicles stories from Pan Am stewardesses during the Jet Age.

Podcast: Steven Tagle on “Notes on Looking Back.” Steven talks about writing this essay, originally in Greek, as a way to explore his love of the language and the experience of learning, speaking, and writing in it. Steven first came to Greece several years ago as a Fulbright Fellow. He discusses his current writing project about borders and migration, and the time he spent visiting and getting to know a family in a refugee camp in Greece. Steven also talks about life in Greece—how friendly and welcoming Greek people can be to outsiders, and how the country weathered the pandemic.

Podcast: Mary O’Donoghue on “Safety Advice for Staying Indoors.” In this conversation, Mary talks about crafting a story that explores two points of view within the same Irish family, both stuck inside during a strong storm, both coping with loss. She also discusses her work translating Irish-language poets, her interest in stories that require the reader to connect their own dots, and what it’s like to edit fiction for AGNI while writing her own short stories, too.

Podcast: Carin Clevidence on “Ghosts of the Southern Ocean.” In this conversation, Carin discusses her essay from the issue and talks about how her experiences traveling to Antarctica on expeditions have changed over the years, and how that change comes through in her writing. She also discusses her 2011 novel The House on Salt Hay Road, and the novel she’s recently completed about an expedition to Antarctica.

Podcast: Julian Zabalbeascoa on “Igerilaria.” In this conversation from San Sebastián, Julian discusses his short story from the issue and talks about writing stories set in Spain during the Spanish Civil War and the Basque Conflict. He also discusses his love of travel and his experiences running study abroad programs for college students, and what it’s like to teach The Common in his classes at UMass Lowell.

Danabelle Gutierrez’s poem “Uwi” is an extended poetic definition of the Tagalog word; the poem opens: “Uwi verb / to go back to your residence,” and progresses to probe questions of ancestry and home. Stephanie Dinsae’s poem “Dey” begins with a definition of the pidgin form of “to be” and explores language, code switching, and “how a word could be a tool for survival.” In his essay “Notes on Looking Back” Steven Tagle’s reflects on the Greek translation of himself, and the ways in which learning a new language and diving into the meaning and contours of individual words can open new avenues of writing and being in the world. Using these texts as examples, students might undertake their own poem or prose exploration of language, place, and belonging.

Alexandra Watson’s “My Body as the George Washington Bridge All Lit Up at Midnight” is a concrete poem whose visual form, or body, on the page mimics the shape of the George Washington Bridge; students might explore the interplay of title, form, and content in this poem and bring that focused analysis to writing or revising their own poems. Watson discusses her beginnings as a writer, upholding underrepresented voices, and her involvement as a co-founder and executive editor of Apogee in “Evolution of a Warrior for Literary Diversity: An Interview with Alexandra Watson” (Story Magazine).

After reading Anna Maria Hong’s “Dispellations: Manomaya Kosha,” explore some of the poet’s other “dispellation” poems: “Dispellations: Palm Sunday” (Poetry Daily), “Dispellations: A Prayer,” “Dispellations: Reverb,” and “Dispellations: Curated Ephemera,” and read this brief interview with Hong touching on poems as invocations or prayers, drawing inspiration from fairy tales and folklore, the importance of persistence, and other advice for writers beginning their careers (Shenandoah).

In her essay “This Is My Country,” Shubha Sunder, author of the short story “A Very Full Day,” reflects on her experiences of racism and identity in the US (Lenny). In another timely essay, “Moving Past Silence,” Sunder meditates on the ends of relationships and a future after the COVID-19 pandemic (Catapult).

Tom Sleigh discusses his work as a poet and journalist, the meaning of poetry, and navigating creativity during the pandemic (The Headlight Review). Read more of Sleigh’s poems from Issue 02.

K. Iver, whose poem “Family of Origin Rewrite: 1982” appears in this issue, explores gender identity and expression in an essay titled “putting on a nonbinary face.” (Just Femme and Dandy).